What is Daily Fantasy Sports

From a back-yard game between close friends to a multi-billion dollar a year market, daily fantasy sports (DFS) has blown up over the past couple decades. Millions of people love to play fantasy sports.

The start of daily fantasy sports is attributed to Wilfred (Bill) Winkenbach, Scott Sterling, and George Ross. In a hotel room at the Milford Plaza New York City in 1962, the first ever fantasy football league was created. This league quickly ended up being an eight-team league referred to as the GOPPPL or the Greater Oakland Specialist Pigskin Procrastinators League. The standard regulations for this league functioned by having gamers contribute to a pot and work as the owners/managers of imaginary teams. Players joined a mock draft and also would draft actual professional athletes and depending upon the performance of each specific athlete, gamers were granted points. Whoever had the most points by the end of the day or week ended up winning the entire pot. From there over the years people starting playing fantasy sports in bars/pubs across the US. Soon fans started up organizations of their own.

The fantasy sports market has actually seen incredible development in the past couple of years. What began as a backyard game has actually taken off into a global multi-Billion dollar a year industry. Prior to the Internet, players had to keep track of a large number of players and cash and did so with the use of pen and paper. Now websites have contributed to turning daily fantasy sports to go from a small game between pals to an online sector.

With the advent of the Internet and mobile devices, it is easy for players to set up and manage their groups. The smartphone market in the USA represents more than 260 million mobile phone customers and also a penetration price of 81% that has increased by 35% in 2011. Currently the leading most influential factor of quick market expansion is the proliferation of network infrastructure like 5G. It is agreed that 5G networks will increase the performance by 100 times more than 4G. Where it is available it is already providing better a user experience and is driving the increased interest in the fantasy sports market.

What used to be an easy winner-takes-all, has become a daily and/or weekly event. In the tournaments, players can pay anywhere from $1 to as high as $5000 entrance fees.

The COVID-19 pandemic affected the fantasy sports industry, like all businesses worldwide. It spread across the world, infecting individuals and causing casualties. It additionally disrupted the sports calendars of 2020 and 2021 as lots of leagues throughout all continents took the unprecedented step to suspend or postpone their seasons to avoid infection. This action halted the fantasy sporting market short-term across the world. An example, in 2020 the National Basketball Association (NBA) announced the suspension of the 2019-20 seasons after Rudy Gobert the Utah Jazz center tested positive for the virus.

Even with Covid-19 pandemic, between the United States and Canada around 59.3 million people play daily fantasy sports annually and the average gamer pays out $556.00 a year according to the Fantasy Sporting Activity Video Gaming Association (FSGA),

The fantasy sports market size was valued at $18.6 Billion in 2019, and is anticipated to reach $48.6 Billion by 2027, registering a compound annual growth rate (CAGR) of 13.9% from 2021 to 2027. Football led the industry in regards to the fantasy sports market share in 2019 and is expected to keep its prominence throughout the projection duration.

US States Where Daily Fantasy Sports is Legal

Not all states in the US have warmed to DFS. Some states have completely banned it. Fantasy Sports is available in 43 of 50 states. Each State has its own regulations. In a State like Louisiana, DFS is not available in all Parishes so most gaming platforms are not available in LA so there is no confusion. 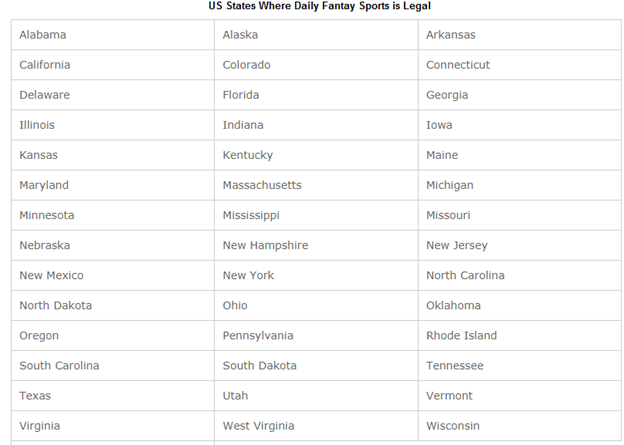 Each online gaming platform has its own list of States where DFS is available. For example Monkey Knife Fight, the fastest-growing and third largest daily fantasy sports gaming platform in North America, is available for playing in 37 States including Canada (excluding Quebec).

The good news is that the variety of states with lawful Daily Fantasy Sports has been expanding over the past number of years. The bad news is that it's been sluggish entering many parts of the nation.

Because of the size of the industry many sports organizations including players and the DFS platforms are taking advantage of the billions of dollars that flow through the DFS industry. For instance, in September 2020 Monkey Knife Fight (MKF) acquired FantasyDraft. In October of 2020, the National Football League Player Association (NFLPA) signed a multi-year deal with Monkey Knife Fight. In Major League Baseball, partnerships with Monkey Knife Fight include the San Diego Padres, Milwaukee Brewers, Minnesota Twins, Miami Marlins, as well as the San Francisco Giants. In the NFL, Monkey Knife Fight entered into contracts covering the Miami Dolphins, Los Angeles Chargers, and the Tampa Bay Buccaneers. Other offers have included the NHL Kings, the MLS Galaxy, as well as PGA golf enthusiast Charley Hoffman. The company also has a collaboration with MLB's Texas Rangers, which concentrates on COVID-19 alleviation in the Dallas/Fort Worth area. And in 2021 Monkey Knife Fight was purchased by Bally.

There is no doubt the Daily Fantasy Sports industry will continue to grow at a rapid pace with more involvement and partnerships from sports teams, players, and related industry businesses.