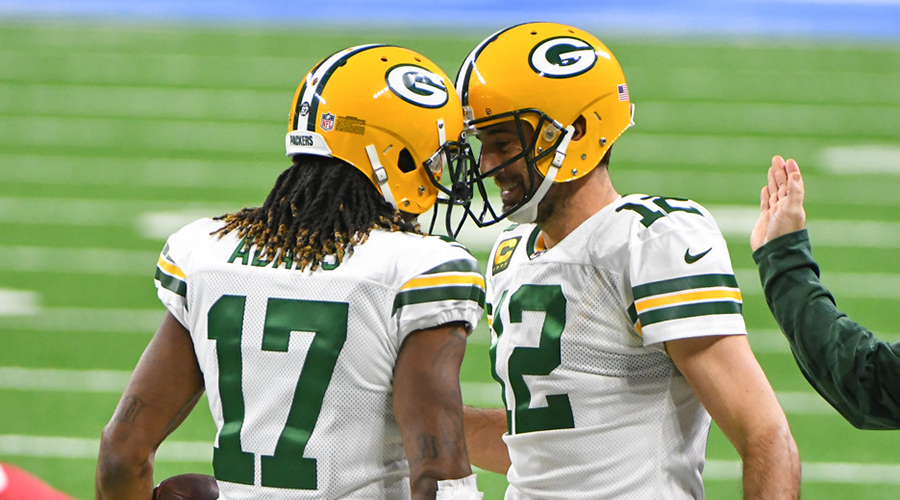 The NFL Playoffs continue this weekend with the Divisional Round and Monkey Knife Fight is all over it, with contests for every game.

There are two games on Saturday, starting with the Los Angeles Rams visiting the Green Bay Packers and the Baltimore Ravens going to Buffalo to take on the Bills.

The Rams have won four of their last six games but they have relied a lot on their defense because quarterback Jared Goff has a broken thumb. His replacement, John Wolford, suffered a neck injury, so Goff is back under center for the Rams even with a thumb that isn’t fully healed.

It has been a smoother trip to the postseason for the Packers, winners of six straight, with no margin smaller than seven points in those wins.

Last week’s win at Tennessee was the Ravens’ sixth consecutive victory and only one of those games had a margin of less than seven points. Whatever wasn’t working for the Ravens in the middle portion of the season seems to be gone and they are going to Buffalo with momentum.

As much as the Ravens might have momentum, there may not be a team playing better than the Bills who have won 10 of their past 11 games, with their only loss in that time coming on a Hail Mary pass at the end of Week 11 against Arizona.

A couple of compelling games to get the playoff juices flowing. Here are some angles to consider for Saturday’s NFL Playoff action on Monkey Knife Fight.

This seems like an achievable number for Rodgers but upon a second look this is going to be a challenge even for an all-time great like Rodgers. Although Rodgers averaged 268.7 passing yards per game this season, he was held to 240 yards or fewer in the last three games of the regular season and he faces a Rams team that is just devastating when it comes to pass defense. In the past 13 games, the Rams have allowed one quarterback to throw for more than 265 yards – San Francisco’s Jimmy Garoppolo passed for 268 yards in Week 6 – so the Rams ought to make this a test.

Goff did not look especially comfortable in relief at Seattle last week, completing 9 of 19 passes for 155 yards but it’s understandable because he’s still playing with a broken thumb! Another week should help but even against a decent Packers pass defense, Goff could struggle to throw the ball.

This isn’t a huge number for a receiver who averaged 64.9 receiving yards per game during the season and has more than 65 receiving yards in back-to-back games but – and this is important – his quarterback has a broken thumb! Yes, it’s possible for Kupp to be productive. He had 78 just last week but if the thumb causes problems for Goff, it should cause problems for Kupp, too.

The best receiver in the game going up against a lockdown pass defense led by the pressure of defensive tackle Aaron Donald and the coverage of cornerback Jalen Ramsey, Adams did average 8.2 receptions per game during the season. He was held to seven or fewer in five of the last seven games and the Rams allowed four wide receivers all season to record eight or more receptions in a game.

After being left in a backup role early in his rookie season, Akers came on late, averaging 92.5 rushing yards per game in the past six. At the same time, Jones has run for 95.0 yards per game in the past six, has established his credentials as a premier running back, and the odds suggest that Packers will be running out the clock at the end of this game. It can’t be overlooked, though, that the Packers are a little soft against the run, giving up 4.5 yards per carry, compared to the Rams, who are among the league’s best in that regard, allowing 3.8 yards per carry.

Basically, the Rams defense is what gives them hope in this game and if they can combine their shutdown pass defense with above-average run defense, then they may be able to keep the score low and close. That being the case, it might be easier for the underdog Jones to stay within striking distance of Rodgers.

This is a big number to cover, even for a quarterback that averaged 284 passing yards per game this season and has at least 320 passing yards in four of his past six games. Baltimore is a tough defensive team, too. They allow 5.6 net yards per pass attempt, which is among the league’s best, and have allowed one 300-yards passer in the past 13 games.

Lamar can break a game open but he doesn’t typically do it through the air. In the past seven games, he has thrown for more than 190 yards just once. Buffalo’s pass defense is okay, better than average statistically, so this is not some matchup that means Jackson will suddenly be throwing the ball around the field.

The Ravens rookie finished the regular season on a roll, going for 54 or more yards in five of his last six games. He rushed for only 43 yards in the Wild Card game but also had just nine carries. Buffalo’s run defense is vulnerable. They allowed 4.6 yards per carry during the season and last week the Colts had two running backs with at least 75 yards on the ground.

As big as that number is, it’s a pretty good margin for two of the Bills’ playmakers. Running through the entire schedule this season, Beasley was within 39 yards of Diggs in nine of 17 games which means Diggs was up by at least 40 yards in eight of 17 games.

The Ravens don’t throw the ball a whole lot but Marquise Brown is as good as they have. He has 22 catches on 28 targets in the past four games. John Brown has played just two games since returning from injury and has four catches on eight targets in those two games.