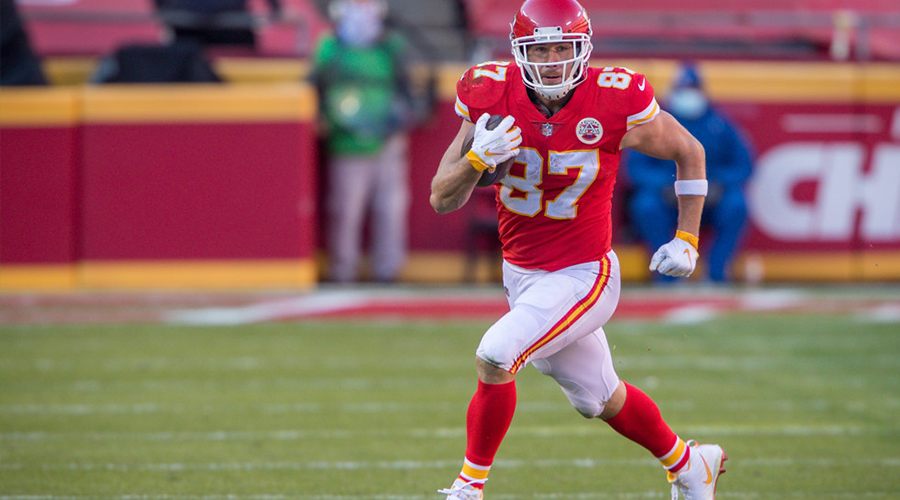 There are two NFL Divisional Round Playoff games on Sunday and Monkey Knife Fight is there with contests for you to play and win.

The Cleveland Browns took down the Pittsburgh Steelers in the Wild Card round, the first playoff win for the Browns since 1994. The Browns have won seven of nine, including that win over the Steelers, with the losses coming in a classic against the Baltimore Ravens and, uh, the Jets? That doesn’t bode well for a matchup in Kansas City.

When a team goes 14-2 there can be a tendency to nitpick because week-in and week-out success is boring. So it goes with the Kansas City Chiefs, a team that hasn’t been overly impressive even though they win almost every week. During their 10-game winning streak, which was snapped in Week 17, the Chiefs had a winning margin of four points or less in five games.

The NFC Divisional game on Sunday is a classic matchup between two quarterbacks in their forties! Tom Brady takes the Tampa Bay Buccaneers into New Orleans to face Drew Brees and the Saints.

Brady’s Bucs have won five straight but they did lose both of their games against New Orleans this season, getting outscored 72-26.

As for the Saints, they had won nine in a row before losing back-to-back field goal games to Philadelphia and Kansas City, and now New Orleans has won three in a row as they look to take a third straight game against Tampa Bay.

Here are some angles to consider for Sunday’s NFL Playoff action on Monkey Knife Fight.

It’s a lot, asking a quarterback to throw for at least 323 yards in an NFL Playoff game. That’s a big number. We’re also talking about Patrick Mahomes who averaged 316 passing yards per game this season and he is facing a Cleveland defense that is below average against the pass both in terms of yards allowed per game and net yards per attempt. Four quarterbacks have passed for more than 322 yards in a game against Cleveland this season, including Ben Roethlisberger who threw for 501 yards in the Wild Card loss last week. Two weeks before, Mason Rudolph passed for 315, so the best quarterback in the league should be able to air it out against this Browns defense.

While the running game is vital to the Browns’ chances, they have been able to throw the ball successfully, too, with Mayfield passing for more than 261 yards in five of the past six games. The Chiefs have also allowed quarterbacks to throw for more than 261 yards in six of the past eight games. There is also the likelihood that, at some point, the Browns will be forced to reckon with a deficit and a time clock that isn’t in their favor and that would incentivize them to throw the ball.

Can you imagine needing 90 yards from a tight end? This is a large number and, still, it’s not unreasonable. Kelce has had at least 90 receiving yards in six of the past eight games and averaged 94.4 yards per game. Cleveland hasn’t allowed a tight end to put up 90 yards on them this season but that doesn’t mean much because Kelce is in a class of his own. The Browns did allow eight wide receivers to put up at least 90 yards so that’s enough room to expect a big game from Kelce.

The Browns receiver has been a consistent threat, with at least five catches in each of his past six games, though the past two weeks he has finished with five catches and that’s not quite enough. Expecting circumstances to dictate more throwing, Landry can get to six or more this week.

Chubb is a consistent and productive runner who averaged 84.4 rushing yards per game this season and even if the Browns are likely to be trailing they will still need to run the ball. Likewise, Edwards-Helaire averaged 61.8 rushing yards per game but also was held under 50 yards in four of his last six games. That opens the door enough for Chubb to do his thing.

Kelce may not have a ceiling as high as Hill but Kelce’s floor is also much higher. It’s how he ended up averaging nine more receiving yards per game than the Chiefs’ star wideout.

What can we take from the previous two Bucs losses to New Orleans this season? Brady passed for 209 yards and 239 yards in those games, which seems nowhere close to what’s needed here. More recently, though, Brady has passed for more than 340 yards in five of the past six games and since Tampa Bay should be passing a lot, he will have a chance to have a more productive passing game against the Saints.

Brees has seen his passing production fade, as his arm strength does not seem up to throwing deep passes or sideline routes and that makes it tough to pile up yardage. He has been held under 275 passing yards in four of his past five games, skipping over the game in which he broke 11 ribs.

It has been an injury-marred season for Thomas and in six games since he returned from his Week 1 injury, with another absence mixed in, Thomas has averaged 6.2 catches per game. With the Saints not throwing deep, Thomas’ ability to take short passes and make something happen is going to have to be part of how they attack Tampa Bay.

Godwin’s production had been up and down for most of the season but it appears he is on the upswing now, with 296 receiving yards in the past three games. Is that enough to believe he can get 70 against the Saints this week? Sure!

Kamara has managed a total of 56 yards on 25 carries against the Bucs this season but he has also been a focal point of the New Orleans offense in the past two weeks, especially, rushing for 254 yards on 45 carries. Fournette has been mostly underwhelming this season but had a season-high 19 carries for 93 yards against Washington in the Wild Card round and it looks like he will be the main ball carrier for Tampa Bay again this week as Ronald Jones continues to deal with a quad injury. The real difference in the matchup should be that the Bucs defense is outstanding against the run, allowing league-low 3.6 yards per carry and that will make it tougher for Kamara to get loose.

Need more picks? Will Harris has you covered with his TD Dance picks, while Conner Rowntree has some bonus MKF plays.