How To Monkey Knife Fight: Fantasy Football on MKF - More or Less

Are you looking for the most fun you can legally have on the internet? Tired of playing against sharks and impossible odds? More or Less is Monkey Knife Fight's most popular game and puts you right into the action removing the headaches of having to draft an entire lineup with players you know nothing about or worrying about salary cap restrictions. Pick a game with the players you want, and simply select "MORE" or "LESS" for each proposed stat line.

Doesn’t that sound like fun? MKF's pinnacle of props is the ticket for you to make every single game exciting and a chance to make some sweet, sweet cash picking the players you know and love.

What is More or Less? How to Play How to Win

What is More or Less?

More or Less makes it extremely easy to pick the players that you like to perform in a given game. Laid out cleanly, you get to decide if a player will compile More or Less in the following categories:

When you choose a player to have either the MORE or the LESS in a given category, all you have to do is worry about that player's performance. You don't need to worry about game totals, playing against other fantasy sharks, shifting game lines or a head-to-head matchup with another player. Pick your contest with the players you like, and lock in a More or Less for each proposed stat line that you feel confident in and let the good times, and cash, roll in.

More or Less is straight forward: pick the players that you feel have the best chance to outperform or underperform their proposed stat line in their game they are playing or slate (Early Star Shootout, Late Star Shootout).

Sounds fun and easy, doesn't it?

How to Play Monkey Knife Fight

First, select the game you want to play. For this tutorial, we'll be previewing Super Bowl LV between the Tampa Bay Buccaneers and the defending Champions, the Kansas City Chiefs.

For any given NFL game, there could be up to ten different More or Less contests to choose from, ranging from two player selections up to a five player contest. Each of these will come with different performance categories, players, and multipliers. More or Less turns every NFL game into a nail baiting and exhilarating experience. MKF makes every game, and every play count.

I've selected two contests for us to play.

As it is the Super Bowl, let's make things interesting. I'll show you what a five player contest looks like, and  will briefly explain why I made those decisions. 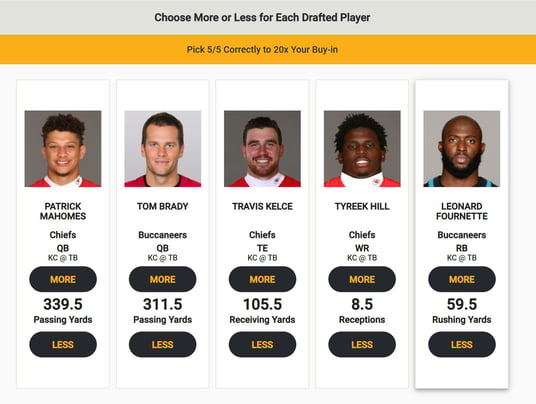 For Mahomes, going the LESS is hard with his seemingly endless amount of arm talent. Keep in mind he's only thrown for an average of 290 passing yards in the 2020 playoffs. For the ageless wonder Brady, we are going to go with the MORE as this could be a come from behind game script, and he's been averaging 286.66 passing yards per game. Kelce seems like a near lock to exceed 105.5 receiving yards (more on this later) and Hill's 8.5 total receptions seems high knowing how much work Kelce will receive. Fournette is a must on the MORE as the Buc's running back seems to have found a new gear in the playoffs. That's a brief breakdown of how I'd tackle a five player More or Less.

We'll get more into the strategy behind MORE or LESS selections in a minute. Let's first talk about why we are really here: how much money can we win having fun playing More or Less?

More or Less has some absolutely crazy multipliers. Depending on your choice of game, they range from the  2/2 contest where you'll get a 3.5x payout if you nail both your picks, all the way up to going 5/5 for a 15x payout.

In MKF's Star Shootout lineups, these multipliers and selections get even bigger, reaching a 100x payout if you can get 8/8 picks correct. Like I said, crazy. What isn't so crazy is how easy it is to win. Couldn't you see yourself putting down $10 on a lineup to win a cool $1,000?

How to Win (DFS Strategy)

More or Less strategy will change week to week. Coach Tony D'Amato of the fictional Miami Sharks said it best: "on any given Sunday, you're gonna win or you're gonna lose". That's the beauty of NFL football, anything can happen on game day.

All the more reason to understand key features of each matchup such as players trending and historical production, opposing team defenses strengths and weaknesses, and specific game conditions such as weather, and stadium type. This is by no means a science. It is a simple set of guidelines that will help you make informed decisions when playing More or Less with MKF.

What I look for in each game and player:

I've broken down an analysis of the players for the Super Bowl. This will give you a glimpse of how you can analyze a More or Less game and make informed picks looking for a couple of key metrics. I have selected a More or Less game that we talked about earlier focusing on total receiving yards for Kansas City tight end Travis Kelce, and total rushing yards for Tampa Bay running back Leonard Fournette.

Here are some keys to choosing Kelce's OVER in this matchup:

"Playoff" Lenny has been on full display for Leonard Fournette and the Bucs as Fournette has led the playoffs with 70.33 rushing yards per game.

Here are some keys to choosing the OVER for Fournette in this matchup:

This might seem like a lot to take in but don’t worry. Every week, MKF’s team of analysts has you covered with More or Less pick recommendations. There can be science behind it, or, you can simply pick the players that you like. These are just a few pointers to help you get the most out of your More or Less experience on a weekly basis.

Still unsure? We'll give you a quick rundown in this video below so you know exactly how to play and win on MKF's More or Less.