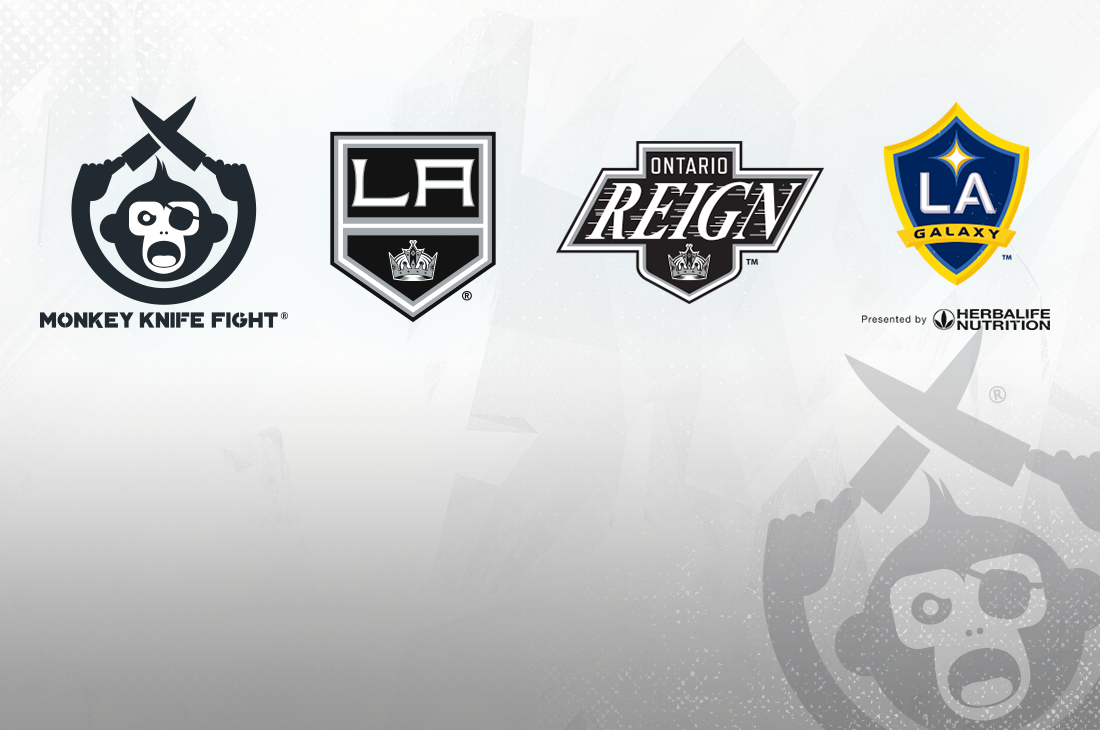 SoCal sports fans, contain your excitement! Monkey Knife Fight has signed a multi-year partnership with AEG, the US-based sports and entertainment giant that oversees a number of professional sports teams in California.

Under the agreement, MKF will be the exclusive fantasy sports partner of the LA Kings (NHL) and the LA Galaxy (MLS) and an official partner of the Ontario Reign (AHL), the Kings’ minor-league affiliate.

The new relationship provides MKF with increased brand awareness and deepens its ties to passionate sports and entertainment fans across Southern California. The deal also marks MKF’s first partnerships with an NHL, MLS and AHL franchise and underscores the company’s overall commitment to helping grow the sport of hockey and soccer.

As the exclusive fantasy sports partner of the LA Kings and LA Galaxy, MKF will have an enhanced brand presence for both popular Los Angeles teams’ venues and online media channels. For the LA Kings, MKF will have a premiere corner in-ice logo, which will be featured prominently during all regular-season home games at STAPLES Center. MKF will also receive digital scoreboard and LED stadium ribbon board signage during all LA Galaxy regular-season home games at Dignity Health Sports Park. This is in addition to the partnership elements it will receive with the Ontario Reign, which includes digital signage and in-game marketing elements during all of the team’s regular-season home games at Toyota Arena. LA Kings and Ontario Reign elements will commence with the start of the 2020-21 NHL and AHL seasons, while LA Galaxy elements will begin with the launch of the 2021 MLS regular season.

The agreement is a continuation of Monkey Knife Fight’s plan to heavily target the Southern California marketplace. In addition to signing with Los Angeles’ NHL and MLS teams, in the past year the company has also partnered with the NFL’s Los Angeles Chargers, MLB’s San Diego Padres, XFL’s Los Angeles Wildcats, and PGA Tour golfer Charley Hoffman from San Diego.

“Our partnership with AEG is the perfect opportunity to help strengthen the MKF brand and reinforces our shared commitment to the sports fans we serve throughout Southern California, one of our most important and fastest growing markets. The LA Kings, LA Galaxy, and Ontario Reign are three highly acclaimed teams and we are incredibly proud to be a part of their ongoing success.”

“We’re excited about bringing Monkey Knife Fight into our family of sports partners here at AEG. Our global portfolio of assets includes some of the most iconic sports teams, facilities, and live event offerings, which makes us uniquely positioned to bring our partners the very best. This partnership is an example of that and we look forward to working closely with MKF to further strengthen its brand amongst our sports and entertainment fans in Southern California.”

Sports have always been a major part of Southern California’s culture and lifestyle. Aligning MKF with key teams in the region like the LA Kings, LA Galaxy, and Ontario Reign provides a significant opportunity to introduce fans to its unique style of fantasy sports, while enhancing the brand’s connection to some of the most engaged sports fans across the NHL, MLS, and AHL. With hockey and soccer being central points of interest for many Angelinos, the partnership will strengthen MKF’s ties to the vibrant sports community across Southern California, one of their fastest growing audience regions.

Headquartered in Los Angeles, California, AEG is the world’s leading sports and live entertainment company. The company operates in the following business segments: Facilities, which through its affiliation with ASM Global, owns, manages, or consults with more than 300 preeminent arenas, stadiums, convention centers, and performing arts venues around the world; Music through AEG Presents, which is dedicated to all aspects of live contemporary music performances, including producing and promoting global and regional concert tours, music, and special events, and world-renowned festivals such as the Coachella Valley Music and Arts Festival; Real Estate, which develops world-class venues, as well as major sports and entertainment districts like STAPLES Center and L.A. LIVE, Mercedes Platz in Berlin, and The O2 in London; Sports, as the world’s largest operator of high-profile sporting events and sports franchises including the LA Kings, LA Galaxy, and Eisbären Berlin; and Global Partnerships, which oversees worldwide sales and servicing of sponsorships including naming rights, premium seating, and other strategic partnerships. Through its worldwide network of venues, portfolio of powerful sports and music brands, and its integrated entertainment districts, AEG entertains more than 160 million guests annually. More information about AEG can be found at www.aegworldwide.com.