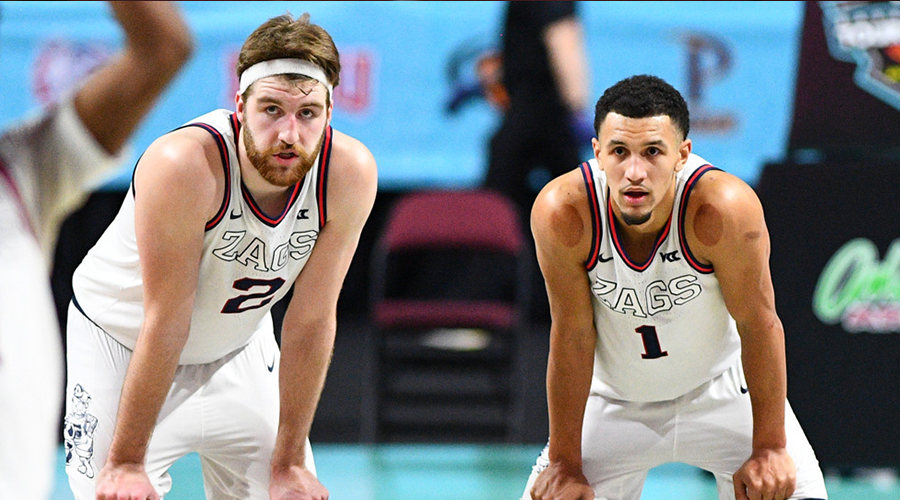 The national championship in college basketball is on the line Monday when the Gonzaga Bulldogs battle the Baylor Bears. Monkey Knife Fight has contests to make the big game even more exciting.

Gonzaga has a chance to be one of he great all-time teams. Indiana University in 1975-1976 was the last time there was an undefeated national champion in college basketball and the Bulldogs are favored to do exactly that this year.

The sophomore forward with the glorious ‘stache has been consistent and efficient in the tournament. In the past four games, he has averaged 25.0 points per game on 66.7% shooting from the field. Baylor is a strong defensive squad but may have a hard time containing the relentless Gonzaga attack.

Baylor’s leading scorer, the junior guard is averaging 16.6 points per game but had been having a hard time putting up points. He scored 17 against Houston in the national semifinal and that was more than he had scored in any of his previous five games.

Baylor’s playmaking guard is averaging 5.5 assists per game for the season but had 11 assists against Houston in the semifinal, his second highest total this season, and has recorded at least six assists in three of the past four games. It’s reasonable to expect Mitchell to play a similarly significant role against Gonzaga in the title game.

The junior guard is a consistent force on the boards. With the only exception a bizarre 0-rebound performance against Loyola-Marymount in late February, Ayayi has grabbed at least six rebounds in 10 of his past 11 games. It gets a little closer, though, when requiring seven, as Ayayi has at least seven rebounds in six of those 11 games.

While scoring is the focal point of Timme’s game, he does rebound effectively and contributes in other ways, earning an average of 33.67 fantasy points per game. Mitchell brings a more balanced approach and is averaging 29.57 fantasy points pe game. That’s close enough to like Mitchell getting an extra 5.5 fantasy points in the championship games.