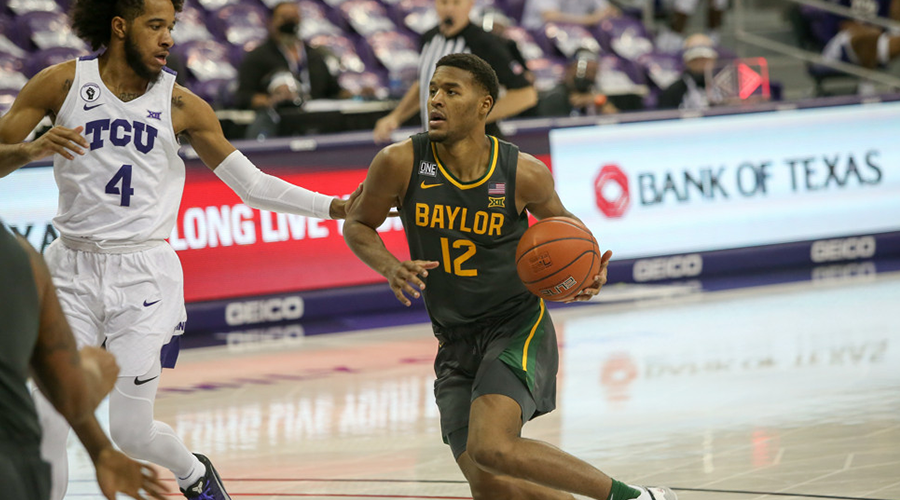 Upsets abound in the first round of college basketball action at the NCAA Tournament, just the way MKFers like it. Monkey Knife Fight has more Fantasy Basketball contests to add to the fun for Sunday’s early games.

No. 3 Texas Longhorns are eliminated by No. 14 Abilene Christian. TEXAS IS NOT BACK, THEY’RE ELIMINATED! 🙀 #MarchMadness pic.twitter.com/kRU9oNYSaD

Here are some Monkey Knife Fight picks to keep in mind when playing the early slate of college basketball action on Sunday.

Although the junior guard averaged 20.6 points per game for the Illini this season, he has been held under 20 points in seven of his past eight games. Dosunmu has scored 18 or more points in four of those eight games but Loyola-Chicago has been a strong defensive team, allowing opponents just 55.8 points per game so maybe Dosunmu’s recent slide will continue.

In Loyola-Chicago’s opening round win against Georgia Tech, the Yellow Jackets’ zone collapsed around Krutwig and he ended up taking just six shots from the field, tied for his second-lowest total of the season. Expect him to get back on track in this game, at least in terms of getting opportunities to score but he has been held under 15 points in six of the past nine games.

Williamson, the senior Ramblers guard, scored a season-high 21 points in the first round win against Georgia Tech. He is averaging 8.6 points per game, which doesn’t sound like much but it is still good for second on Loyola-Chicago. Norris, who is not far behind at 8.4 points per game, has scored 20 and 16 points in his past two games, respectively, but getting an extra 1.5 points with Williamson moves the needle in his direction.

The Bears’ junior guard struggled in the first round, going 5-for-16 from the field on his way to 13 points in a blowout win against Hartford, but he had scored 18 or more points in six of the previous eight games. The question is whether Baylor will score enough against a Wisconsin team that can grind it out defensively.

The senior Badgers point guard went for 21 points in the first round against North Carolina and has scored more than 20 points seven times this season. He has also scored in single digits nine times so there are a wide range of outcomes possible.

The 6-foot-10 senior forward for the Badgers is averaging 5.8 rebounds per game this season but has been held to four or fewer in four of the past five games.

The son of legendary (and current) Orange coach Jim Boeheim, Buddy has really found his stroke lately. The junior guard, who scored 30 in a first-round win against San Diego State, has dropped at least 20 points in six of the past eight games lifting his season scoring average to 17.7 points per game.

The Moutaineers sophomore guard is averaging 16.0 points per game this season but dropped 30 on Morehouse State in the first round. He is shooting 40.6% on threes which should play well against the Syracuse zone.

Culver is a dominant big man. The Mountaineers junior has put up nearly 30.3 fantasy points per game, on the strength of averaging 9.7 rebounds per game. Guerrier, the sophomore Orange forward, has had a solid second season though he was a non-factor in Syracuse’s first-round win. Guerrier’s average game this season has resulted in more than 29.6 fantasy points which would seem to make this a close matchup, provided that Guerrier can bounce back from his rough first game.

The Razorbacks freshman, who looks like a potential lottery pick, is averaging 17.2 points per game, even after scoring just 12 in the first round against Colgate. Odds are that he will take more than eight shots in the second round.

McClung is averaging 15.8 points per game for the Red Raiders and he dropped 16 in the first round but has been held to single digits in three of the past five games.

The sophomore wing for the Red Raiders is averaging 6.2 rebounds per game but had been held to five or fewer in four of five games before grabbing seven rebounds in the first round against Utah State.

Edwards is a junior guard for the Red Raiders who is solid but not spectacular, averaging nearly 23.3 fantasy points per game. Smith, a senior Razorbacks forward, has elevated his game, scoring a career-high 29 points in the first round. He has been good for 28.2 fantasy points per game but his recent scoring uptick raises his ceiling so Edwards might need every bit of those extra points as the underdog in this matchup.