This week’s stop on the PGA Tour is The Palmetto Championship at Congaree and Monkey Knife Fight’s Eagle Eye contest offers a fun new way to play Fantasy Golf and cash in. 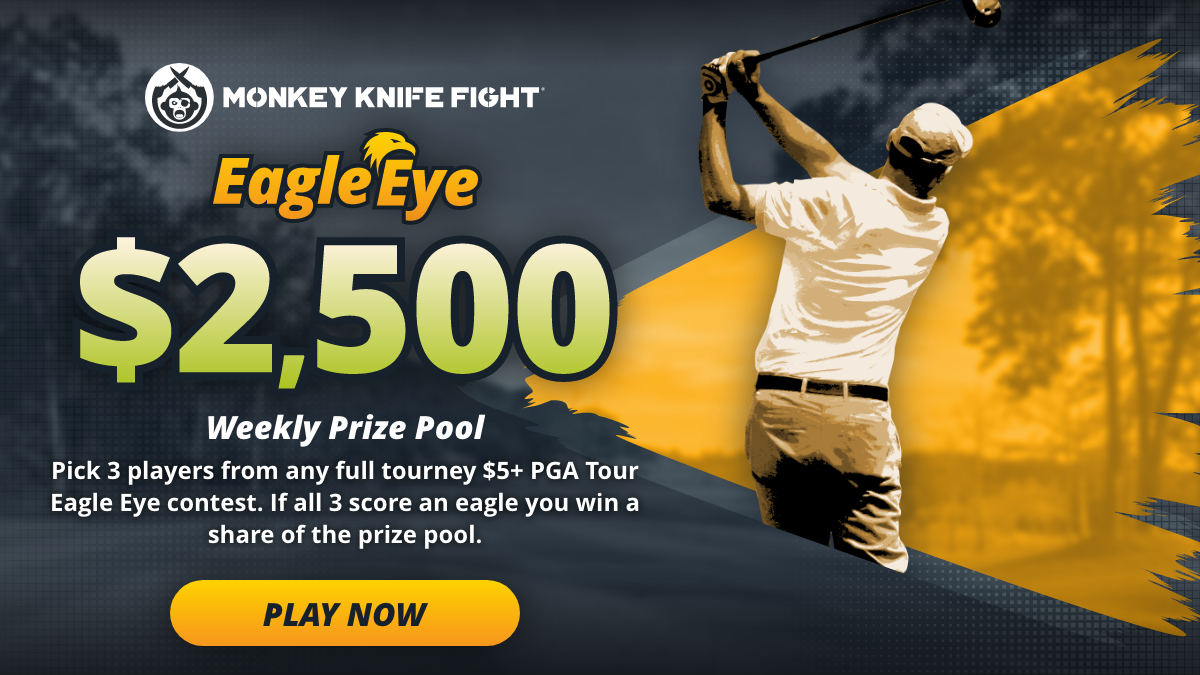 The Eagle Eye contest allows you to pick three golfers for your team and if all three make an eagle in this tournament, you get a share of this week’s $2500 prize pool.

This is the first PGA tournament to be held at Congaree Golf Club near Ridgeland, South Carolina, filling in for The Canadian Open on the tour this season as COVID-19 still presents border complications.

It is the first tour event to be played on this course so it is not like there is a long track record, or any track record, to lean on in terms of which players perform best here. When searching for eagles, might as well focus on the players that have strong eagle rates and happen to be playing well in their recent tournaments.

Since this is not a premier field, it is more difficult to find players that have had some recent success in addition to having a favorable eagle rate.

Here are some contenders to keep in mind when making your Monkey Knife Fight Eagle Eye DFS picks for this week’s top on the PGA Tour, The Palmetto Championship.

Not as active as many others on the PGA Tour this season, DJ is a South Carolina native so maybe he gets a little extra motivated to play in this event. He is tied for sixth in holes per eagle (90.0). Since a Top 10 finish at the Genesis Invitational in February, though, Johnson has struggled, missing cuts at The Masters and PGA Championship and finishing outside the Top 25 in four of his five other events. But, the eagle rate and the longer track record of Johnson, which includes four Top 10 finishes this season after winning the FEDEX Cup last season, makes him worth a shot.

That time when Dustin Johnson hit a 369-yard drive to four feet for eagle. 🤯pic.twitter.com/4MCgzRFX9G

It appears that Koepka swings from one extreme to another. In a dozen tournaments this season, he has missed the cut five times. He also has five Top 10 finishes, including one win and two second-place finishes. He did finish in a tie for second at the PGA Championship and does have the 16th best eagle rate (one per 97.7 holes) on the tour this season.

41 feet for eagle❗️🦅@BKoepka erases a 2-over start with one long putt. 😮

Not a huge hitter off the tee but Snedeker is also prone to fire darts from the fairway and sometimes they drop in, giving him the 19th best eagle rate (one per 108.0 holes) and while he was scuffling earlier in the season, Snedeker has made the cut in six of his past seven events, with three Top 20 finishes.

Brandt Snedeker just made his third eagle in the last month at the Valspar Championship. 🤯pic.twitter.com/QBrxn1h1Kt