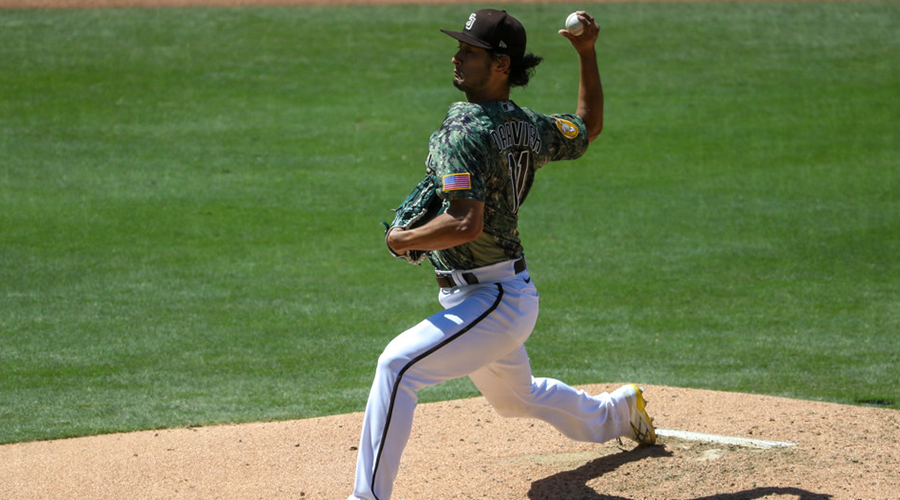 Tuesday offers a full slate of games in Major League Baseball and Monkey Knife Fight has Fantasy Baseball contests for all, bringing you many chances to play and win!

Here is some Monkey Knife Fight picks to consider when playing Tuesday’s MLB schedule on MKF.

The Padres ace has been terrific this season but this is a big number to cover. He has recorded more than seven strikeouts in six of his 13 starts this season and is facing a Colorado Rockies lineup that might not be great but they tend to make contact at home, with a 20.2% home strikeout rate ranking third lowest in MLB. Darvish has started two games against the Rockies this season and the splits were great – 10 strikeouts against them in San Diego, two strikeouts in Colorado.

A brilliant addition to the Marlins rotation this season, Rogers has seven or more strikeouts in seven of his 13 starts this season but his strikeout totals have dipped recently – six or fewer in three of his past four starts – and he is matched up against a St. Louis Cardinals lineup that has a low home strikeout rate (21.8%).

While this has not been a typical Soto season, he is starting to round into form. He has reached base multiple times in nine of the past 10 games, has a .429 on-base percentage against left-handed pitching and a .521 OBP at home, both of which set him up for success against the Pittsburgh Pirates with Tyler Anderson on the mound.

Although Brantley does not hit for power he can get on base. Against right-handed pitching, he rocks a .426 OBP but he has been bizarrely worse at home, with a .304 OBP and does not have an easy matchup, going against Texas Rangers ace Kyle Gibson.

The veteran Royals lefty has picked up his game recently, recording at least seven strikeouts in six of his past seven starts. He also gets the benefit of going against the Detroit Tigers, the team with the highest road strikeout rate (29.2%) in MLB.

Same goes for the rising young Tigers starter. Mize has at least six strikeouts in five straight starts but he is matched up against a Kansas City Royals lineup that has the third-lowest home strikeout rate (20.6%) in MLB.

As ridiculous as Tatis Jr. has been this season, the splits are really in his favor Tuesday. He is slugging .705 against right-handed pitchers and .733 on the road going into a game in Colorado with Chi Chi Gonzalez on the mound.

Tampa Bay’s star outfielder has a .337 on-base percentage against left-handed pitching and a .361 OBP on the road, good enough to like his chances against Dallas Keuchel and the Chicago White Sox.

The start of the season was pretty rough for Montas but the A’s right-hander has been coming on recently. In his past five starts he has a respectable 3.54 ERA and has at least six strikeouts in four of those games. He does face an Angels lineup that tends to make contact, with a 21.7% road strikeout rate.

While Donaldson has a paltry .323 on-base percentage against right-handed pitching, that is countered by a sizzling .413 OBP on the road going into Tuesday’s game at Seattle, with the Mariners sending Chris Flexen to the mound.

Oddly, the right-handed hitting third baseman for the A’s has struggled against left-handed pitching this season, slugging .381 in a small sample (23 plate appearances). That causes enough doubt for Tuesday’s game against the Angels, with Andrew Heaney on the bump.

Even though Tuesday’s matchup has Cruz on the wrong side of his preferred splits, he’s still pretty dangerous, slugging .495 against right-handed pitching, and that pairs nicely with a .614 road slugging percentage to think that Cruz can have some success against Chris Flexen and the Seattle Mariners.