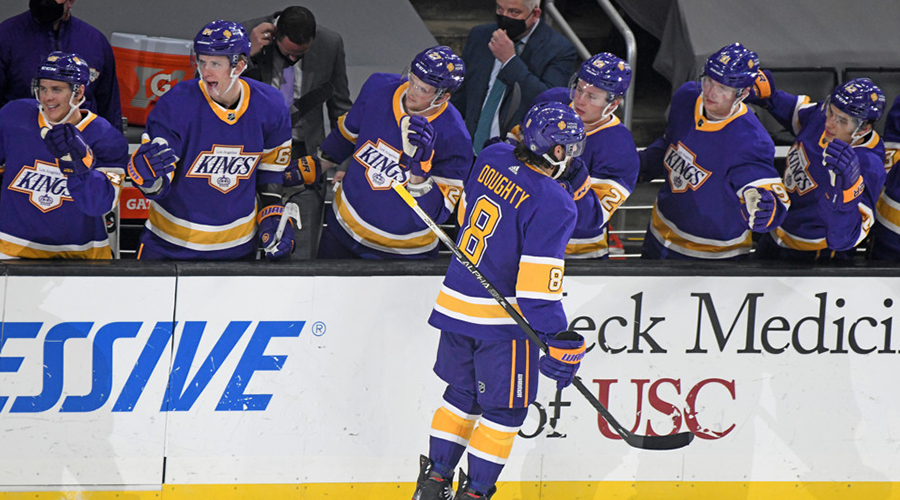 Saturday brings 10 NHL games to the schedule and Monkey Knife Fight has Fantasy Hockey contests running for all of them to make it even more fun.

You know times are tough for the #Sabres when a coach gets left hanging by the goalie on purpose. 😭

Here are some Monkey Knife Fight picks from a Star Shootout angle to keep in mind when playing Saturday’s NHL action on MKF.

The Maple Leafs sniper is a shot generating beast on home ice, with 88 shots in 20 home games this season. Coupled with his 19 blocked shots, he is averaging 5.35 shots plus blocks per home game. Take that number and factor in that the Maple Leafs are hosting the Ottawa Senators, a team allowing 33.4 shots against per 60 minutes on the road this season, the third highest rate in the league. That’s enough to swing the pendulum in Matthews’ favor.

If nothing else, the Wild ought to show up playing guilty after getting drilled 9-1 by the Blues Friday night. In 21 road games, Kaprizov has been good for 4.8 MKF fantasy points per game and was seriously locked down Friday, managing one shot on goal with no points and no blocked shots.

Overall this season, Hamilton is not generating shots like he did before getting injured last season, but his shot rate has increased lately, with 51 shots on goal in the past 12 games. However, Hamilton has managed five shots plus blocks in just eight of 19 home games. While a matchup with Detroit is favorable, and Hamilton launched 11 shots on goal against them in one game this season, his shots plus blocks totals in the other head-to-head games with the Red Wings are 2, 6, 3, and 2.

On home ice this season, the Nashville Predators are averaging 30.5 shots on goal per 60 minutes of game play. They are also missing forwards Filip Forsberg and Eeli Tolvanen, making them even less threatening offensively so while there might be some concern with fatigue catching up to Vasilevskiy, who has been mediocre in his past couple of starts, the bigger issue is that Nashville may not even generate enough shots for Vasilevskiy to earn 32 saves.

On the other hand, Hellebuyck faces a Montreal Canadiens team that can put pucks to the net – 33.8 per 60 minutes on home ice ranks third in the league – and even without crease crasher Brendan Gallagher, they can get enough shots for Hellebuyck, who is averaging 31.3 saves per 60 minutes on the road this season.

Hedman is the leading contender for the Norris Trophy and, in part, it is because of how complete he is as a player. He will score points, he will get shots on goal, and he will block shots. All told, he has averaged more than 6.4 MKF fantasy points per road game this season. Marner is pretty great in his own right and on home ice is averaging nearly 6.6 MKF fantasy points per game. Mix in the fact that he is going against the Ottawa Senators Saturday night and the edge slides towards Marner.

While the Kings center does have 16 assists in 21 road games this season, he has picked up those assists in 11 of those 21 games, so it’s nearly a coin toss. The calculation is not made any easier by Kopitar recording an assist in three of seven games against Saturday’s opponent, the San Jose Sharks. Let’s be optimistic for a quality two-way player, shall we?

Thank your friends at Monkey Knife Fight for this gift. Kane has been really productive this season, to the tune of 6.2 MKF fantasy points per home game. The Kings aren’t the team that should shut down Kane’s offensive production, so side with Kane and move on.

This one is a little closer, as Doughty is averaging nearly 4.6 MKF fantasy points per game. He has scored more points on home ice but generates more shots on the road and the question is whether the Sharks are the team to bring him down below his average production. From the looks of it, probably not. Doughty has six assists, 15 shots on goal and 13 blocked shots in seven games against the Sharks, which would work out to nearly 5.7 MKF fantasy points per game.

This has been a breakout season for Nurse, especially offensively, and he has produced 6.1 MKF fantasy points per road game – the opportunity to play with Connor McDavid and Leon Draisaitl does come with its advantages. The season has been kind of the opposite for Giordano, who has not produced like he has in past seasons and, given his age, it is possible that decline has set in, but Giordano is hovering around 4.2 MKF fantasy points per home game.

The Oilers superstars are the top two scorers on the road this season but Draisaitl holds a one-point advantage over McDavid, which is certainly enough to like Draisaitl getting an extra half point at Calgary.