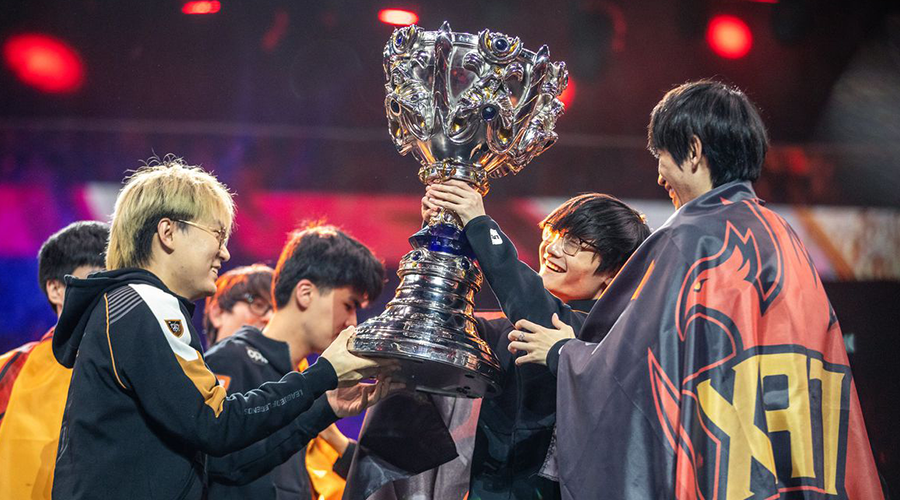 PSG Talon and Beyond Gaming, two of the best teams in this year’s PCS, will face each other in the qualifying semi-final on Friday for a direct spot in the final. The loser moves to the second qualifier.

.Here is a breakdown of some LoL Monkey Knife Fight picks for April 16th's esports slate. 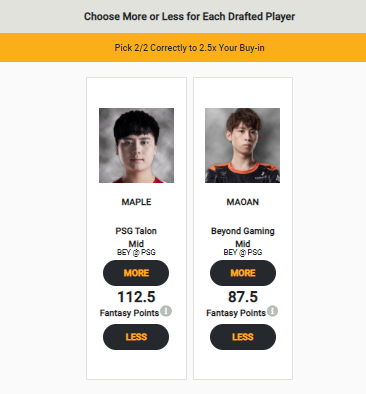 Maple has had an outstanding PCS spring campaign. Here is proof of that statement. In the regular season, he had a KDA of 12.41, with 4 kills, 0.94 deaths and 7.72 assists per map. This was over a sustained period of time of 18 maps. Somehow, he has managed to improve that in the playoffs with a KDA of 19.5 and a kill participation of 13. However, this form is fairly reflected in this fantasy points score. If he was manning the bottom lane, there was a slightly higher chance but Maple, being a mid laner, might find it hard to rack up as many as 113 fantasy points.

In the regular season, Moaon had a kill participation of close to 12 (4.6 kills and 7.3 assists per map). The only liability in his game was his death rate (2.2), which was a direct result of him attempting to stay aggressive. That method of operation can often lead to overextending in team fights. Still, he had a KDA of 5.41 and a creep score of 294.7. It isn’t going to be easy to match up against Maple in the middle lane but Maoan also requires 25 fantasy points fewer. 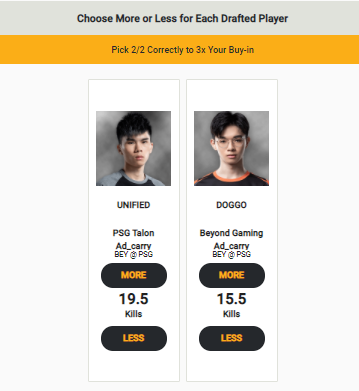 Unified has been in sensational killing form in Summoner’s Rift right through this season. In the regular season, he racked up an average of 6.22 kills per map over a period of 18 maps. In fact, he had the best KDA on his team (13.75) built on just 0.89 deaths a map. Usually, when a player stays alive for longer, leveling up is the natural outcome. In such a case, a player tends to become unstoppable in their quest to take down the nexus. That’s also why Unified has averaged 8 kills per game in the playoffs of spring. His form is just too good for him not to generate 20 kills.

In comparison, Doggo has had a much more subdued spring season, from a kill production standpoint. He generated 5.67 kills per map in regular season, which is excellent as an individual metric. Over four maps in the playoffs, he has put up 15 kills. If this game goes to four maps, Doggo should comfortably have over 16 kills. The only tricky point to consider is whether Beyond Gaming can actually win a map.