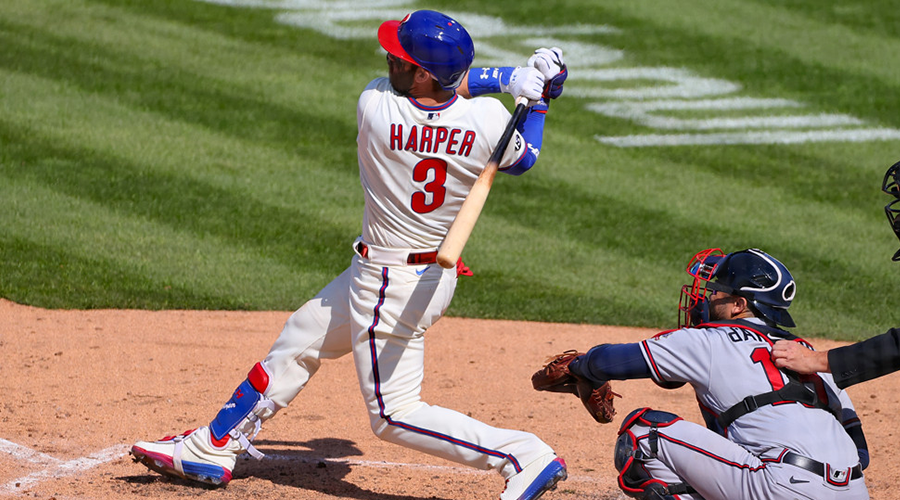 Friday means a full schedule of games in Major League Baseball and that means a bunch of opportunities to play daily fantasy sports and Win Fantasy Baseball Contests on Monkey Knife Fight.

The best pitching match-up of the day looks like it is in Chicago, where White Sox lefty Dallas Keuchel is going against Cleveland’s ace Shane Bieber.

Our #FantasyBaseball analyst @ByScottCullen gives out some players to could go yard on Friday! ⚾️

Here are some DFS picks to consider when playing Friday’s More or Less MLB action on Monkey Knife Fight.

The Phillies starter is not a big strikeout pitcher to begin with, recording 13 strikeouts in four starts, and he has already faced the Mets twice this season, striking out three in both games. The Mets have the third lowest road strikeout rate (22.1) in MLB, too, so all the signs seem to be pointing in the same direction.

The Mets slugger has not been driving the ball early in the 2021 season, slugging just .328, but maybe this is the kind of matchup that works in his favor, a right-handed starter who is not overpowering could be what Smith needs to get at least a couple of bases, something he has managed in three of eight road games this season.

Nimmo is an on-base ace who has a .457 on-base percentage this season despite going 0-for-9 with three walks in his past four games. With regression seeming to catch up to him after a blazing hot start it is not the time to expect him to reach base multiple times.

Even if Harper does play, after catching a pitch with his cheek on Wednesday, he has a total of 16 runs plus RBI in 11 home games this season, which checks in at just under 1.5 runs plus RBI per game and makes it challenging for him to pick up multiple runs + RBI against the Mets and Marcus Stroman, who has a 2.25 ERA and 0.96 WHIP through four starts.

Minnesota’s starting pitcher has been right around this number, recording 22 strikeouts in four starts – two games with five Ks and two with six Ks – and faces a Kansas City team with an average road strikeout rate (24.9%). If Pineda can go more than five innings, he will probably get to the needed six strikeouts.

Singer is really coming into his own in his second MLB season and that includes 25 strikeouts in four starts. The Twins do have a lower-than-average home strikeout rate (21.0%) but Singer can still get to at least six strikeouts.

Perez is a much different animal at home and on the road this season, slugging .625 in Kansas City but just .311 away from home. Mix that with a better than average pitcher going for Minnesota and Perez accumulating multiple total bases in three of 10 road games and this one doesn’t look like it is going to have the distance.

Although Santana remains excellent at getting on base, with a .364 on-base percentage overall, but it’s just .273 on the road (compared to .436 in Kansas City).

The transition to the West Coast has been relatively smooth for Darvish, as he has a 2.27 ERA and 0.85 WHIP in his first five starts for the Padres. He also has 37 strikeouts in 31 2/3 innings, including back-to-back 9-strikeout performances against the Dodgers. Against a Giants lineup with a higher-than-average road strikeout rate (26.4%), Darvish can keep rolling.

Webb is coming off his best start, striking out eight in seven innings, and the Padres do have a higher-than-average home strikeout rate (24.6%). Maybe that is enough to get him to five strikeouts but that Padres lineup is also good enough to get Webb into trouble, too.

It is probably a bizarre small sample but Tatis Jr. has been slugging .333 in San Diego this season, which is much lower than his road slugging percentage (1.077) so maybe take the conservative approach.

San Francisco’s veteran first baseman does have a good track record against right-handed pitching but his road on-base percentage of .278 this season is not very encouraging for a matchup against Yu Darvish.