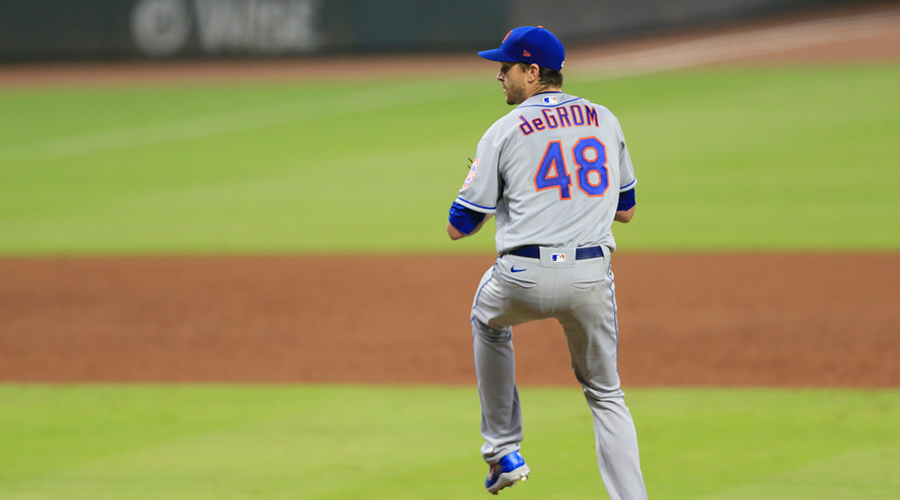 Major League Baseball has cruised through its first weekend with only a few hiccups and it feels like we are getting ready to play out a full 162-game schedule. That includes a 13-game schedule on Monday which means tons of Fantasy Baseball contests to play and win on Monkey Knife Fight.

After most teams have played a full series this isn’t a day for prime pitching matchups. The Mets had their opening series postponed, so they send ace Jacob deGrom to the bump but most of the other starters are closer to the back end of the rotation and that might make it a little easier on hitters. It’s early in the season, and cool weather does seem to favor pitchers but when it comes to getting fourth and fifth starters they have to be easier to touch up than going against the aces.

Here are some Monkey Knife Fight picks from a More or Less Star Shootout angle to keep in mind when playing Monday’s MLB action on MKF.

The Mets ace is likely the best pitcher in baseball, at least he has been over the past three seasons, winning two Cy Young awards before finishing third in voting last season. He also struck out at least nine in seven of 12 starts last season but only managed to do it once in his first five starts so maybe the Mets will be inclined to ease their ace into the action against a Phillies team that had a lower-than-average (20.6%) strikeout rate at home last season.

This is a large number for Williams, who does not have a great strikeout rate (7.0 K/9 for his career, 8.0 K/9 last season) and also isn’t terribly effective so he does not pitch deep into games. He topped out at six strikeouts in a game three times in 11 starts last season so even if Milwaukee had a higher strikeout rate on the road (25.1%) in 2020, Williams is not likely the one to punch them out.

Meadows is off to a nice start, with a couple of home runs in the first three games, and like many who struggled in 2020, that quick start is an encouraging sign for a potential bounce-back performance in 2021. He faces the Red Sox and Nick Pivetta at Fenway Park, a location in which Meadows has been able to produce during his career, slugging .641 in nine games.

Although Verdugo had an impressive .367 on-base percentage last season, his first in Boston, he has started the 2021 season without reaching base in 11 plate appearances. He may be due to get on base but counting on multiple trips to first base given his early slump seems a little optimistic.

He is not scuffling to the degree that he did at the start of last season but Yelich has three hits and no walks in 13 plate appearances this season for a mediocre .308 on-base percentage. But, with Trevor Williams starting for the Cubs, maybe this is worth the hunch to take Yelich with the expectation that he will take advantage against a weak starting pitcher.

Houston’s third baseman is off to an outstanding start, with six hits and two walks in 14 plate appearances at Oakland in the opening series. He is matched up against the Angels and starting pitcher Jose Quintana, which does not seem like a factor that would slow down his hot start.

You can set your watch by the Angels superstar getting on base. He led the American League in OBP from 2016 through 2019 then had a mere .390 on-base percentage last season. Through four games this year, he has reached base 10 times in 18 plate appearances (.556 OBP) and while Astros starter Luis Garcia has shown promise, Trout is a little beyond the stage where he might worry about an opposing starter potentially being pretty good.

Montas had a great start to the 2019 season before getting busted for PEDs. He returned to action last season and got hit hard, which makes it difficult to trust his performance going forward. Even in his struggles last season, though, Montas recorded at least five strikeouts in seven of 11 starts. The challenge he faces is that the Los Angeles Dodgers have a formidable lineup and had a low strikeout rate (22.3%) on the road in 2020 and it’s easier to trust the Dodgers as a whole than it is to bank on Montas right now.