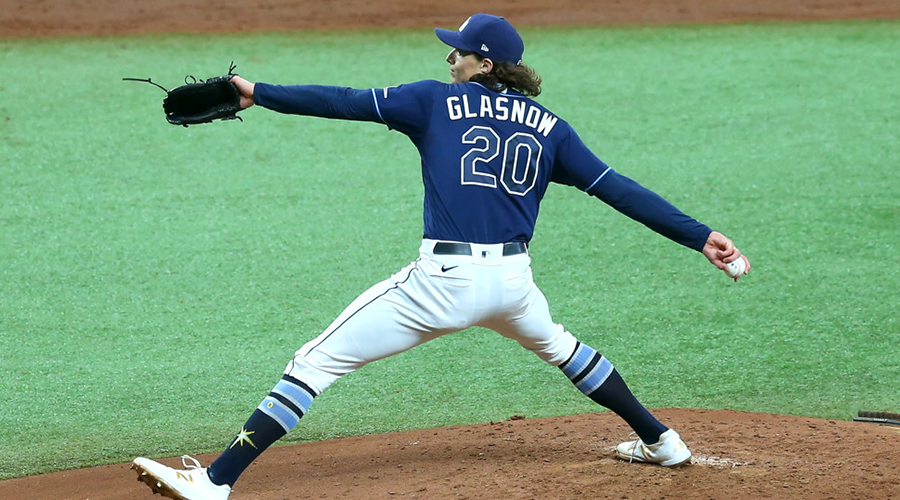 There are 10 games on Monday’s MLB schedule and they are spread out so that you can play Monkey Knife Fight Fantasy Baseball contests along with every game.

After managing a dozen strikeouts through his first three starts of the season, Buehler has kicked it up a notch, striking out 19 in his past two starts. He also gets the benefit of facing a Cubs lineup with the highest home strikeout rate (27.4%) in the National League.

While Velasquez can miss bats, and the Brewers have the highest road strikeout rate (29.1%) in the National League, it is entirely fair to wonder if he is going to stay in the game long enough to reach seven strikeouts. In his first two starts this year, Velasquez has gone four and 4 1/3 innings.

The Cardinals third baseman has been hitting pretty much as expected for St. Louis – not nearly as dominant as his days in Colorado but still pretty good. For today’s game against the New York Mets with Joey Lucchesi on the mound, the relevant percentages are that Arenado is slugging .438 at home and .500 against left-handed pitching and that’s enough to like Arenado’s chances at accumulating at least two total bases.

Even though he is getting regular reps in the Twins lineup right now, Arraez has reached base multiple times five times in 13 home games. The matchup against the Texans Rangers, with Dane Dunning on the mound, is not the most challenging but hardly an easy touch either.

The Rays ace has been dealing this season and has recorded at least nine strikeouts in four of his past five starts. He faces an Angels lineup that tends to make contact and has one of the lower home strikeout rates (21.7%) in MLB.

Colorado’s staff ace has put up at least six strikeouts in three of six starts overall and two of four starts at home. Sounds pretty even. Let’s take a look at the opposition: the San Francisco Giants have the 14th highest road strikeout rate (23.3%) but the third-highest strikeout rate (28.7%) against right-handed pitching so that nudges this towards the over.

The A’s have been willing to take Montas deeper into games than his performance might warrant. He has a 6.20 ERA and 1.50 WHIP through five starts but has also gone six innings in three of those starts, throwing at least 100 pitches in each of those starts. The Toronto Blue Jays lineup should be able to do some damage against him, though, so it does not seem like he should make it through six full innings.

After a surprisingly effective start to the season, allowing one earned run in each of his first three starts, the Blue Jays southpaw has been coming down the Earth in the past couple of starts and faces an Oakland lineup that has been better than average against left-handed pitching.

It is incredibly difficult to get the Angels superstar out this season. He has a .535 on-base percentage at home and against right-handed pitching, which applies to tonight’s game against the Tampa Bay Rays and Tyler Glasnow. As great as Glasnow has been, it still is more likely than not that Trout can reach base multiple times.

San Diego’s rising star at shortstop, Tatis Jr. has been much more effective this season against left-handed pitchers and on the road but tonight is at home against Pittsburgh’s right-handed starter Tyler Anderson. In 14 home games, Tatis Jr. has accrued a total of 13 runs plus RBI.

While Anderson has been quietly effective for the Pirates, with a 3.38 ERA and 1.24 WHIP, he has also gone six innings just once in five starts.

Even though Kremer has 18 strikeouts in 15 innings, he is not going deep enough into games to count on him punching out at least six hitters. He has recorded at least six strikeouts once in four starts but does face a Seattle Mariners lineup that has the highest home strikeout rate (30.2%) in MLB as well as one of the highest strikeout rates (29.3%) against left-handed pitchers.