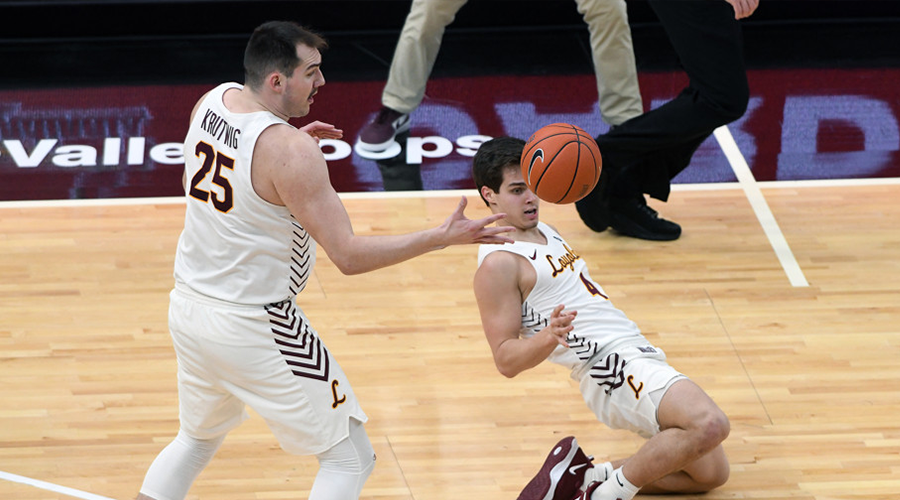 The Sweet Sixteen of the NCAA Tournament tips off Saturday and Monkey Knife Fight has contests to make the madness even more exciting.

Loyola-Chicago’s hefty senior center is averaging 15.0 points per game this season and had 10 points in the first round, followed by 19 points in the second round of the tournament. Oregon State has played better defensively since the Pac-12 tournament so they may have a shot to at least contain Krutwig.

The Beavers’ senior guard is averaging 15.6 points per game this season and scored 13 and 26 points, respectively, in the first two games of the tournament. The challenge for Thompson is that Loyola-Chicago is excellent defensively. They have allowed 56.1 points per game on the season and before we get too caught up in the strength of schedule in the Missouri Valley Conference, recognize that they just held No.1-seed Illinois to 58 points.

The Rambers’ sophomore point guard is only averaging 3.1 assists per game this season but had 5.2 per game last season and had eight assists against Georgia Tech. in the first round and four assists against Illinois in the second round. He plays a lot, like more than 35 minutes in five of the past six games, so he is going to have his opportunities.

Alatishe, a junior forward for Oregon State, is only averaging 9.5 points per game but he stuffs the stat sheet and his 1.5 steals and 1.2 blocks per game make a real difference for fantasy scoring. An average game for Alatishe this season has yielded nearly 28.9 fantasy points. Krutwig is a physical force in his own right and his average game has been good for almost 32.5 fantasy points per game.

Villanova’s sophomore wing is averaging 16.0 points per game this season but has scored 18 or more in each of the Wildcats’ past three games. Baylor can be tough defensively, allowing 65.8 points per game, but they do have a tendency to just run up the score on their side and force the opposition to try to keep up.

The senior Baylor guard is averaging 16.1 points per game this season and had scored at least 17 in five straight games before he was locked down against Wisconsin in the second round, managing just nine points on 3-for-11 shooting.

The senior Wildcats forward is grabbing 6.5 rebounds per game this season and has at least six rebounds in six of the past seven games and that includes 16 rebounds in the first two games of the tournament.

The coach’s kid is averaging 18.0 points per game for the season but the junior sharpshooter has scored at least 25 points in five of the past six games. If the Orange are going to have a chance to keep pulling upsets, they will need Boeheim to keep shooting.

The junior guard is leading the Cougars with 18.1 points per game and he should not get rattled when the Orange goes to a zone defense because Grimes is hitting 41.7% of his threes this season. He has also scored at least 19 points in seven of the past 11 games.

Coming off a terrible game against Rutgers, in which he was 1-for-9 from the field on his way to scoring four points, Sasser had scored at least 12 points in four straight games before that dud. He has had some wild fluctuations in scoring – he’s been held to six points or less three times in the past seven games – but it still seems more reasonable to expect at least a dozen points from him in this game.

For the season, Guerrier has been the more consistent performer, averaging 8.5 rebounds per game, compared to 5.3 per game for Dolezaj. This is a significant margin to cover, though so Dolezaj plus 2.5 rebounds seems like a more reasonable play.