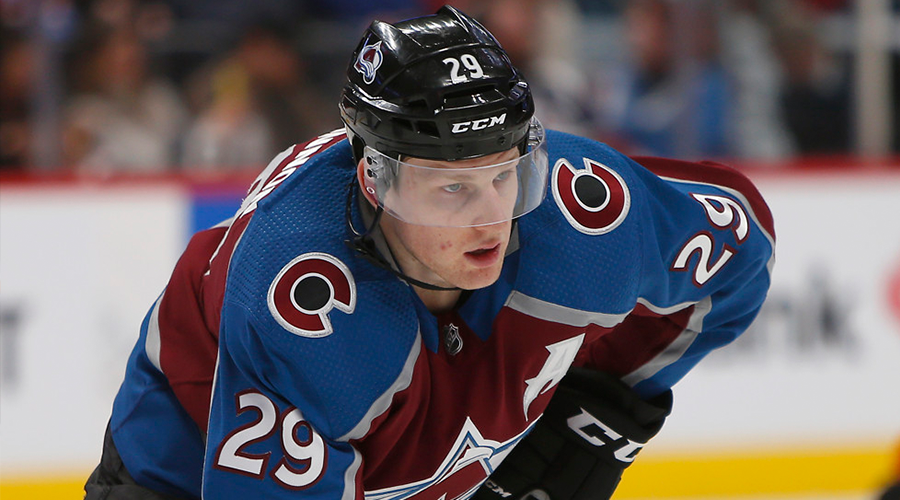 There are half a dozen games in the NHL Wednesday and Monkey Knife Fight is there with Fantasy Hockey contests for all to add to the excitement.

You can almost feel that punch through your screen. 😵🤛 #NHLBruins pic.twitter.com/yIb0igGqqR

This is a substantial number to cover for the Jets goaltender, who is playing great right now and is averaging 30.1 saves per 60 minutes on the road this season. He faces an Ottawa Senators squad that is averaging 31.7 shots per 60 minutes on home ice, which is above average, but maybe not enough to count on Hellebuyck stopping at least 31 of those shots.

The Avalanche star is generating 4.38 shots plus blocks per game on the road this season and the Avs are in St. Louis, where the Blues are allowing 29.2 shots per 60 minutes on home ice, which is ever-so-slightly better than average. In his past 10 games overall, MacKinnon has five or more shots plus blocks in five of them so this number is probably right where it needs to be but with St. Louis a solid enough defensive side, maybe lean towards the lower number.

Winnipeg’s No. 1 center has 18 assists in 23 road games and those assists have come in 15 games, so the odds are in his favor. He also has nine assists in seven games against the Senators this season, held without an assist in just one of those seven games. After the trade deadline, the Sens should be even more suspect on the blueline – believe it or not, Mike Reilly was really important for them on the back end this season – so Scheifele and the Jets should be looking at a productive game.

This is not quite as automatic as might be expected at first glance. Makar has nine assists in 13 road games this season, with those assists coming in eight games. While he does have four assists in four games against St. Louis, those assists have come in two games so it is a relatively balanced proposition but it is still more likely that Makar finds his way to at least one helper.

The Sharks winger has not been terribly consistent this season. There are games in which he is the dominant force on the ice and others where he just isn’t a huge factor. In 17 home games, he is averaging 4.89 MKF fantasy points per game and while the Anaheim Ducks are a below-average defensive team, counting on Meier for at least six MKF fantasy points seems like asking a lot.

The Avalanche captain has been really productive this season, good for 6.1 MKF fantasy points per game on the road. Taking on a St. Louis Blues team that is about average defensively should still lean towards six plus fantasy points.

Calgary’s captain is a shot blocking force and is averaging more than five shots plus blocks per game on the road this season. At Montreal, where the Canadiens are one of the top shot-generating teams, which gives Giordano a good chance at more blocked shots.

Pacioretty is a relentless fantasy force, in part because of how many shots he generates. Ultimately, he has been good for 6.4 MKF fantasy points per game and the Golden Knights are in L.A. to take on a Kings team that it a little below average defensively. Rantanen is his own brand of relentless, though because he scores so much on that line with Nathan MacKinnon and Gabriel Landeskog.

The Jets winger is a more dangerous scorer on home ice but still has 19 points in 23 road games and is going against an Ottawa Senators team that is more than a little vulnerable defensively. Kaprizov and the Minnesota Wild are playing early in the afternoon against the Arizona Coyotes. As great as Kaprizov has been in his rookie season, he is averaging 5.4 MKF fantasy points per home game, so the edge in this matchup goes to Connor.