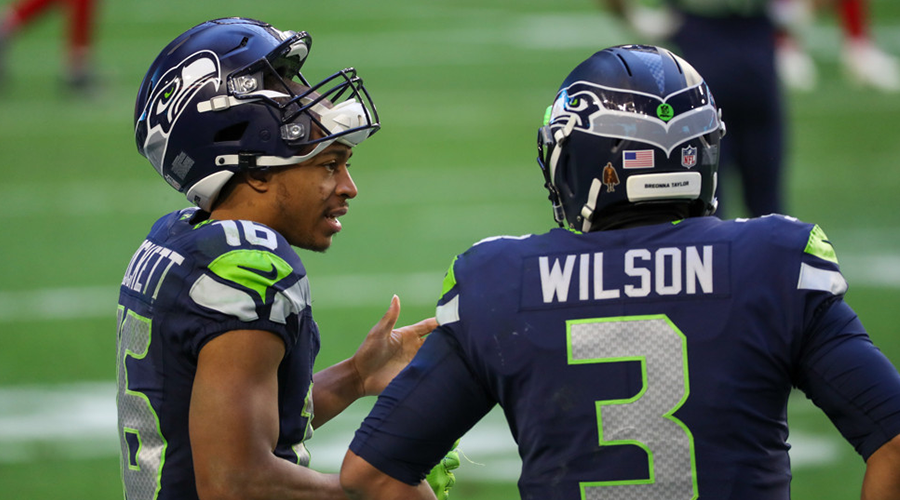 There are three NFL Playoff games on Saturday, followed by three more on Sunday. Monkey Knife Fight has contests for you to play in each and every one of them.

The Buffalo Bills have been on a roll, winning nine of the last 10 games, with their only loss coming on a Hail Mary against the Arizona Cardinals in Week 10. Indianapolis has won four of the last five games and their only loss in that span was a blown two-touchdown lead against Pittsburgh in Week 16.

The Los Angeles Rams and Seattle Seahawks hook up in an NFC West battle. The Rams split their last six games of the regular season and have a quarterback situation that is up in the air. Jared Goff suffered a broken thumb in Week 16, forcing John Wolford to make his NFL debut last week. Seattle’s quarterback situation is more settled and they won six of their last seven games.

The last game of the day has the Washington Football team hosting the Tampa Bay Buccaneers. The Bucs won the last four games but also won five of seven with their two losses coming by a field goal to playoff teams (Rams and Chiefs). Washington won the train wreck that was the NFC East but they did win five of seven down the stretch to enter the playoffs with a home game and at least a little positive momentum.

Here are some contests to consider for Saturday’s triple-header NFL action on Monkey Knife Fight.

Allen has had a phenomenal season for the Bills, averaging 284 passing yards per game, and throwing for more than 301 passing yards in eight games. Indianapolis was dominant against the pass early in the season but leveled out as the season finished, giving up more than 300 yards passing in four of the last five games. All told, the Colts had seven games in which the opposing quarterback passed for more than 301 yards and they allowed 241.6 passing yards per game, just a little higher than league-average. That’s still a pretty big number to cover.

After running the ball 30 times for 253 yards in Week 17, Taylor ended his rookie season as the league’s third leading rusher, gaining 1,169 yards on 5.0 yards per carry. He is apparently dealing with a shoulder injury but it’s difficult to imagine him missing this game as he has become a focal point for the Colts attack, running for more than 77 yards in five of the past six games, with the only miss coming in a Week 16 loss to Pittsburgh when he ran for 74 yards. The Bills allowed four running backs to rush for at least 78 yards against them this season but none since Week 10.

It was a tale of two seasons for Wilson and the second half of it wasn’t very productive. He was held to 255 or fewer passing yards in seven of his last eight games and he faces a Rams defense that has been stifling. The last time the Rams allowed a quarterback to pass for more than 255 yards was Week 7.

Whether it’s John Wolford or a banged-up Jared Goff playing, the Rams receivers should be able to get involved in the passing game. At the same time, Woods has been held under 57 receiving yards in four straight games and the Seahawks held him to four catches for 48 yards in Week 16 but it can’t be ignored that the Seahawks allowed an average of 285 passing yards per game, the second highest mark in the league.

Kupp didn’t play in Week 17 but has been activated from the Covid-19 reserve list. He did average 64.9 receiving yards per game this season and put up 66 against the Seahawks in Week 16.

Only two quarterbacks all season threw for more than 295 yards against Washington, Jared Goff in Week 5 and Ben Roethlisberger in Week 13. Thing is, Brady has thrown for more than 340 yards in four of the past five games (and five of the past seven).

An incredibly inspiring story, Smith has also passed for 219 yards on 51 passes in the past two games. Sure, he missed some time with an injury but there may not be another quarterback who seems like a greater risk when they drop back to pass.

McLauring had six or more receptions in nine games this season but he’s battling an ankle injury and that could help level the playing field. With the Washington Football team likely to be playing catch-up at some point, McLaurin should get his touches.

Although Godwin has been very productive in the past couple of games, catching 10 passes for 217 yards as the Bucs have scored 91 total points in back-to-back wins, the Washington Football team has been stellar against the pass this season, allowing 191.8 passing yards per game and 5.3 net yards per pass attempt, both of which ranked second in the league.

Needs some more picks? Check out Will Harris' TD Dance selections for the Saturday slate!