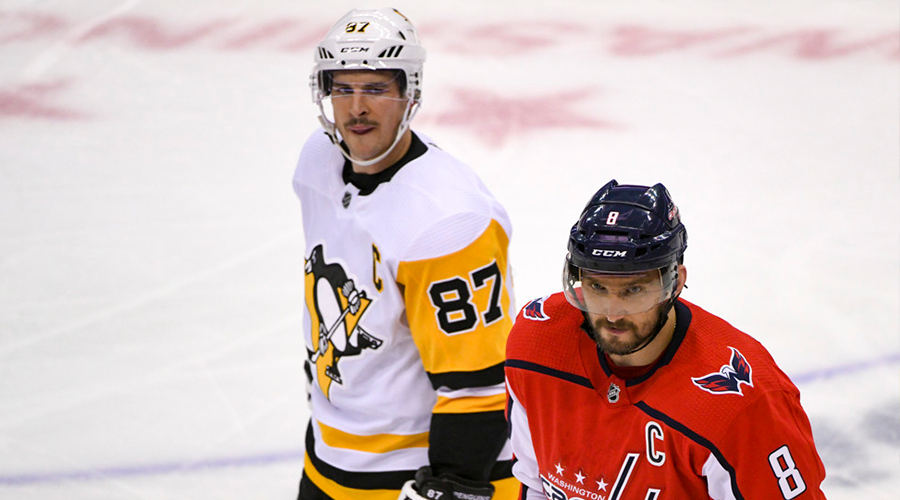 Tuesday’s National Hockey League schedule has five games and Monkey Knife Fight has contests for all of them.

The best game of the night should be in Vegas, where the Golden Knights are hosting the Colorado Avalanche. Two of the Stanley Cup favorites entering the season, the Golden Knights are rolling along with a 10-2-1 record while the Avalanche were mediocre to start the season and were just heating up before having to take a Covid-19 hiatus. They are 7-4-1 after losing a 1-0 decision at Vegas on Sunday.

A marquee matchup has the Washington Capitals in Pittsburgh to take on the Penguins, with the Capitals looking to bounce back from Sunday’s 6-3 loss to the Penguins. As long as Sidney Crosby and Alex Ovechkin are involved, it is still a spotlight game.

New York State is busy, with the Rangers hosting the New Jersey Devils and the Islanders staying upstate to take on the Sabres. The Devils have not played yet this month while the Sabres returned to action Monday. There have been some unscheduled breaks in the game.

Finally the Los Angeles Kings host the Minnesota Wild as the Wild return to action for their first game since getting shut down after their February 2 game at Colorado.

Tonight’s Nashville-Dallas game has been postponed due to the power outages in Texas. It’s refreshing to have games delayed by something other than Covid-19 but still it has been a chore to keep up with every game that has been postponed in the NHL this season.

Here are some angles to consider for Tuesday’s NHL action on Monkey Knife Fight.

Crosby is not off to an amazing start this season, with 12 points in 13 games not up to his typical standards. He does have seven assists in 13 games but that includes a couple of multi-assist games so he has only recorded an assist in five of 13 games. So the numbers say maybe not but in a head-to-head with Ovechkin, Crosby does seem to rise to those occasions with 51 assists in 55 career games against the Capitals.

This is a big number to cover considering that Ovechkin is not quite the premier shot generator this season. He has 3.9 shots per game, which is still very good, but lower than his usual standards. Like Crosby, though, Ovi does seem to get up for these games and has 308 shots in 62 games against the Penguins, which is almost five per game so maybe he makes this close but, still six shots plus blocks is something Ovechkin has done twice in nine games this season.

Ovechkin does generate more shots and that alone gives him a more solid foundation for fantasy production and his 13 points in nine games this season is more impressive than Crosby’s 12 points in 13 games but getting an extra 2.5 fantasy points is a lot for Crosby. It’s significant to even have Crosby as an underdog but getting those points makes him a very lively ‘dog.

Coming off a miserable performance against the Islanders Sunday, during which he had no points and two shots on goal, while the Sabres failed to put a shot on goal in the third period, Eichel should rebound. Only once this season has he been held without points in back-to-back games and in the second of those games he still managed four shots and two blocked shots so he can find his way to six fantasy points.

Barzal does not put a ton of shots on goal but is a driver of offense for the Islanders, producing 15 points in 14 games. Typically, Hall would generate a lot more shots but his current shot rate of 2.7 per game is the lowest of his career so that paired with his nine points in 11 games makes him an unlikely favorite in this matchup.

The Devils rookie defenseman does not play a lot, yet, but how can you ignore eight points in the first nine games of his career? Facing a Rangers team that is suspect defensively makes the matchup even more appealing.

Hughes had slowed down a bit after his quick start to the season but still has eight points in nine games and he will need to score to stay in this matchup because Trouba, who only has two assists in 13 games, had a combined 52 shots plus blocks so he can create fantasy points without getting on the scoresheet.

Parise will take more shots but Kopitar has been the much more productive scorer this season, putting up 17 points in 13 games compared to Parise’s five points in 11 games.

Once again, like the Hughes-Trouba matchup, this is a high-scoring young forward going against a defenseman who does not have a lot of points but gets enough shots on goal and blocked shots to be a consistent fantasy producer. In Kaprizov’s case, he does have eight points in nine games so that ought to give him a chance against Spurgeon who has just two assists in 11 games.