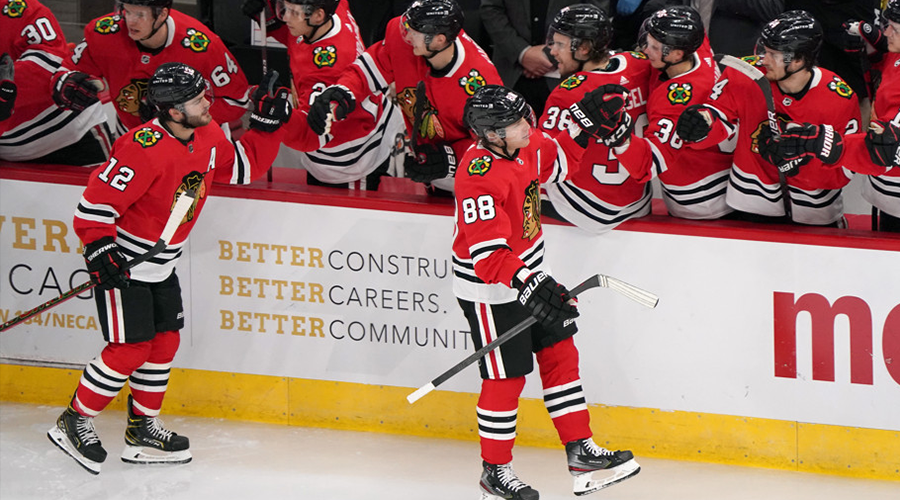 It is a busy night north of the border as there are three games, involving six of the seven Canadian teams.

The Toronto Maple Leafs will try to bounce back against the Ottawa Senators after turning a 5-1 lead into a 6-5 overtime loss on Monday.

Then there are a couple of later matchups, as the Winnipeg Jets are in Edmonton for a second straight game after beating the Oilers 6-5 on Monday. The Vancouver Canucks have one win in their past eight games and are about to play their fourth straight game against the Flames, this time in Calgary.

The Florida Panthers and Carolina Hurricanes square off plus there is an Original Six matchup with the Chicago Blackhawks visiting the Detroit Red Wings.

Here are some Star Shootout angles to consider for Wednesday’s NHL action on Monkey Knife Fight.

Andersen’s season had been fine – not great but fine – before Monday’s loss to Ottawa, when he allowed six goals on 31 shots. Now, he is sitting on a .901 save percentage in 14 games and, more importantly for this particular question, does not typically face enough shots to count on at least 30 saves in a game. Andersen has finished with 30 or more saves in three of 14 games, averaging 25.3 saves per 60 minutes. The argument for more than is that Ottawa is a team that is trailing on a consistent basis so they generate 31.7 shots per 60 minutes, the second-highest rate in the league, and goaltenders have 29.4 saves per 60 minutes against the Senators this season.

This is a big number to cover, even for Matthews, who is one of the most prolific shooters in the league, averaging a career-high 4.3 shots per game. Coupled with 1.2 blocked shots per game that does put Matthews right in the neighbourhood of 5.5 combined shots plus blocks but Matthews can not finish with 5.5 shots plus blocks; it would have to be either five or fewer or six or more. He has accumulated at least six shots plus blocks in eight of 15 games this season and does face an Ottawa Senators team that surrenders 31.1 shots per 60 minutes, a rate that is higher than league average.

The Oilers superstar has 21 assists in 17 games and has picked up a helper in 10 of the past 11 games. Going against the Winnipeg Jets, who are around middle of the pack defensively, does not suggest that this should be the rare night in which McDavid fails to record an assist.

Scoring goals is so difficult that it is easy to be against a player scoring a goal in a specific game. After all, DeBrincat has eight goals in 13 games this season but has a couple of two-goal games so he has found the back of the net in six of those 13 contests. In three games against Detroit this season, DeBrincat has zero goals, three assists, and seven shots on goal after he was held without a shot in more than 23 minutes of ice time against the Red Wings on Monday. Maybe that should suggest that it is still really hard to score goals, even against a weak Detroit team, but it also feels like DeBrincat might be due.

Although his point production runs through peaks and valleys – Muzzin has six points in the past seven games but has recorded points in just three of those seven games – Muzzin’s ability to accrue shots and blocked shots gives him a reliable foundation for fantasy production. It doesn’t mean that he’s a sure thing for at least five fantasy points but, on average, he would put up about 3.7 shots plus blocks per game so any kind of point production on top of that would do the trick and the Senators are not necessarily a shutdown defensive operation.

Two London Knights grads who have some creative similarities in how they pile up points in the National Hockey League. Marner has been a very slightly better point producer with 23 points in 16 games compared to Kane’s 22 points in 17 games. Kane’s edge comes from more consistent shot generation, as he has 3.7 shots on goal per game compared to 2.6 per game for Marner. The Maple Leafs take on the Ottawa Senators and the Blackhawks are facing off against the Detroit Red Wings so neither one gets a real advantage based on the opposition. Looks like a slight edge to Kane.

Tkachuk gets a lot of pucks on net, averaging 4.0 shots on goal per game, so that gives him a solid foundation for fantasy production but he still has trouble converting offensively, with 10 points in 17 games. By comparison, Svechnikov has 13 points in 13 games while averaging 3.1 shots on goal per game. The difference in point production makes Svechnikov a lively underdog in this matchup.