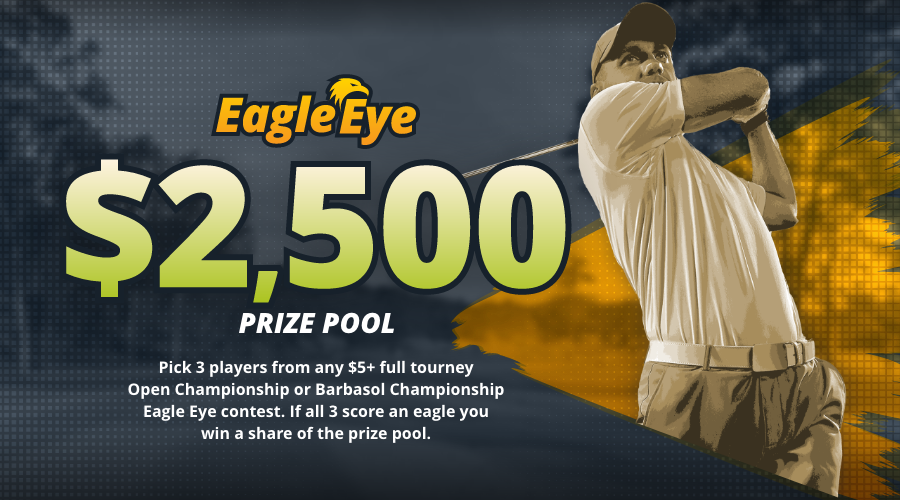 Since there's two PGA tournaments going on, we're giving MKFers an extra chance to win by including both the Open Championship and the Barbasol Championship for the $2,500 Eagle Eye prize pool!

In a $5+ Full Tournament PGA Eagle Eye contest, just pick three golfers on the Star Shootout slate. If each of your selections records an Eagle during the tournament you played, you get a share of the prize pool. If no one wins the prize pool, it rolls over to the next week.*

You can pick from either pool of players at the Open Championship along with the Barbasol Championship, but they cannot be matched together - they'll be entered as two separate tournaments when you click on the golf page over at MonkeyKnifeFight.com. We'll tally the winners from each tournament into the $2,500 prize pool.

We had just one winner in our Eagle Eye contest last week at the John Deere Classic! ⛳

Remember, you must play a minimum $5 contest to qualify for the bonus prize pool, which is different from the regular Eagle Eye MKF contest, but is entered as the same contest.

Unsure on how to play the Eagle Eye? Give this tutorial a read-over here!

The Eagle Eye bonus pool is a part of our new 3 For All contests we've launched where we'll be giving out weekly bonus prize pools for all sports!

*Play a $5+ Full Tournament Eagle Eye contest for The Open Championship or The Barbasol Championship to be eligible for the $2,500 Prize Pool. In order to qualify for a share of the prize pool, each of the 3 players selected in a single $5+ Full Tournament Eagle Eye contest must record at least one eagle (two under par) or better during the tournament. The prize pool will be split evenly between all entrants with qualifying contest entries. Entrants with multiple qualifying entries will receive a share of the prize pool for each qualifying entry. Prize will be awarded in MKF Dollars. MKF Dollars are usable for contest entry on Monkey Knife Fight. MKF Dollars have no cash value, are not eligible for withdrawal, are not transferable, and may be reclaimed by MKF if they go unused for a period of more than one (1) month. MKF Dollars will be invalidated across all accounts if a user opens more than one account.