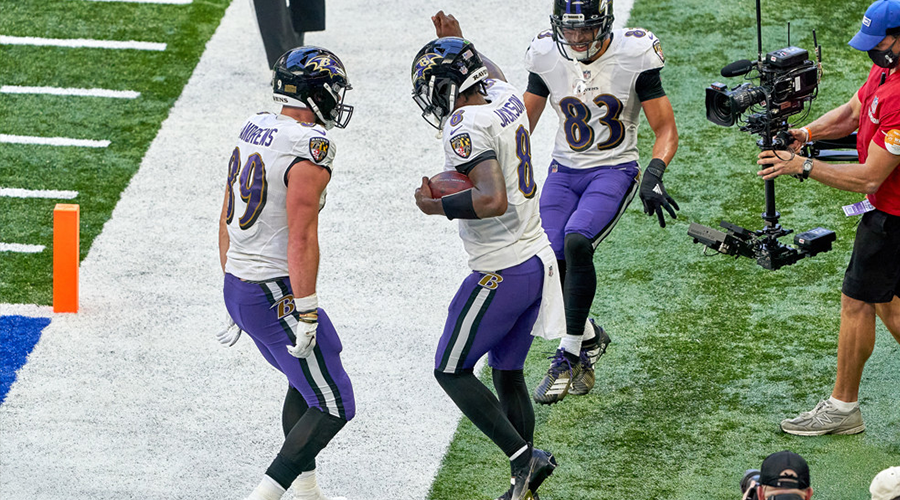 I’m @itsharristime of True North Fantasy Football and I will be here to guide you through my Touchdown Dance selections on a weekly basis throughout the season. I breakdown Sunday's games (Dancing With The Stars, Two To Tango, The Big Dance)Thursday Night Football (Thursday Samba) and Monday Night Football (Save the Last Dance). You can find my Week 14 Sunday preview here.

What better way to start your week than watching football and winning some cold, hard, cash by selecting three plays that need to do a TD Dance? Sounds like the best way to shake away your case of the Mondays.

Have the holidays come early? NFL schedulers are finally giving fantasy gamers a Monday Night Football with a game total of over 45 points. With major fantasy players on both the Ravens and Browns it seems that we may be in for some holiday cheer earlier than December 25th.

Let's hope so. There is also hope that Mark Andrews is 100% coming off of the COVID-19 list. Andrews was activated on December 9th, and if ready to go will be a problem for the Browns. The Browns have let up the 2nd most fantasy points to the tight end position, and Andrews had his biggest fantasy game against these very same Browns in Week 1 going for 58 yards and 2 TDs. Andrews seemed to be catching his stride in Weeks 10-11 before COVID hit the Ravens. Andrews is the #1 receiving option on the Ravens and even after missing 2 games, still has 6 TDs on the year and should continue to flirt with TE1 numbers.

With Andrews back in the fold, it's hard to give a nod to Marquise "Hollywood" Brown in this game. It is tempting as the Browns have been picked apart in their secondary all year, and Hollywood put up over 100+ against them in Week 1. And that's what we are going to do as the Ravens will need to be relevant in the air to overcome a tough Browns run defense led by Myles Garret. It's not only the tough run defense that fantasy gamers will be up against: the Ravens are back to a four headed committee at running back with Mark Ingram, Gus Edwards, Justice Hill and J.K Dobbins all seeing touches in Week 13 against Dallas. Yuck. Brown takes away that frustration of predicting what Ravens running back will be relevant. On any given play Hollywood can break open a game, as we saw against the Steelers in Week 11 and in a must win game for the Ravens, Brown needs to be in the Ravens game plan.

Who would have thought it would be the Ravens needing a win to catch the Browns in Week 13?  The 9-3 Browns will be in tough against the stingy Ravens defense and they need to stick with the game plan that has got them this far. It has been the Brown's ability to utilize play action and then pound the ball that has allowed them to be a playoff contender in the AFC. The game plan for this Monday will have to follow a similar script: get up quick, run the ball, and force Lamar Jackson & Co to play catch up through the air. The key to this working is securing the lead, and then handing the ball off to Nick Chubb to eat up the clock and continue to build the lead. The Browns run at the 3rd highest rate in the NFL, and even after missing 3 games with a sprained MCL, Chubb is well on his way to another 1000+ rushing yard season averaging 99.6 per game in 2020.  Chubb seems to be the featured back since coming back from injury, and since Week 10 has out carried Kareem Hunt 76 to 56 during this time. Chubb has also been much more effective with his Redzone touches, converting 27% of his Redzone touches into touchdowns since Week 10.

Combine Chubb's ability to bust off a big run and his Redzone efficiency and you have a trio in Andrews, Brown and Chubb that are certainly worth "Saving the Last Dance" for. Good luck!