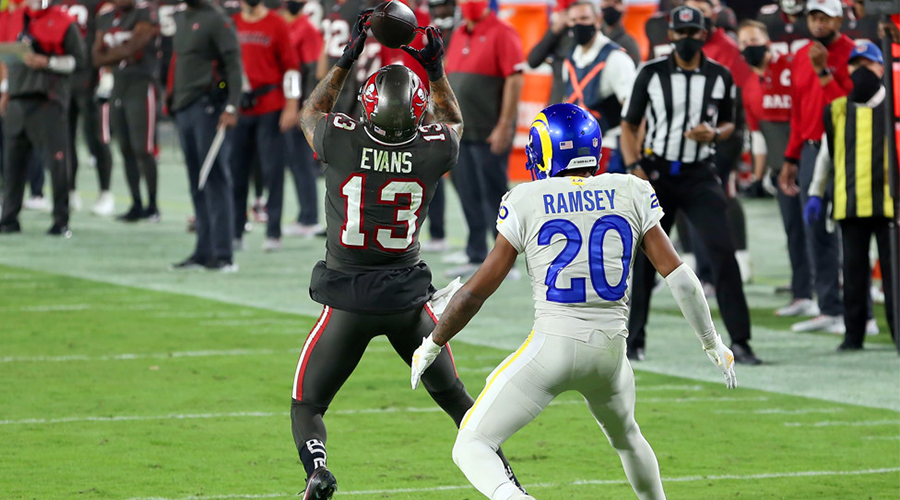 Dance Monkey Dance!: The $5,000 TD Dance giveaway is BACK for Week 13. Rules are easy: enter any early slate TD Dance game and have all THREE players score a touchdown for a chance to win a piece of a $5,000 prize pot. This is on top of all the loot you'll put in your pocket from your regular TD Dance goodness (you must play a minimum of a $5 contest)!

Need help getting started? Here's a Star Shootout lineup for the early games that will give you a good shot at your share of the $5K:

It was a New York miracle courtesy of Derek Carr and Henry Ruggs to make sure the Jets didn’t pull off the upset! #TakeFlight #RaiderNation pic.twitter.com/VkZjwx5j60

Oh the Jets. Only the Gang Green would be able to have the Raiders on the ropes in the final seconds of Week 13 only to blow it with a blitz call.  Derek Carr was able to find a streaking Henry Ruggs for the game winning touchdown. This cost the Jets their only legitimate shot at winning this season and defensive coordinator Greg Williams his job. The Jets bring their misery on the road with them to Seattle in which on paper looks like a prime spot for both quarterbacks to go to to town with the passing game. The Seahawks allow the most points to fantasy wide receivers, and the Jets rank 10th in total points given up to the WR position. Between the two teams, that's 24 receiving TDs to the wide receiver position.

Jamison Crowder will look to build upon this total, and extend his recent TD production streak. Crowder is coming off of a 2 TD game against Las Vegas, and commanded a 30% target share in that game. Jets QB Sam Darnold has more passing options (rookie Denzel Mims (out), Breshad Perriman) but his go-to-boo when healthy has always been Crowder. We've seen Darnold be unleashed before in DGAF scenarios, and, I'm pretty sure that we can say that's where the Jets are now at 0-12. A healthy Crowder and a YOLO Sam Darnold is a good bet to get to some TD dancing going against the Seahawks this week.

Russell Wilson and the Seahawks start to the season was record setting. It looked like no one could touch Russ' cookin' and the best wide receiver duo in the league of Tyler Lockett and D.K Metcalf were smokin' hot as well. And then, Russ' cookin' didn't taste so hot any more. The sizzle seemed to come off the team after a tough 44-34 loss to the Buffalo Bills in Week 8. Russ needs to fire the grill back up and continue to dish the salsa to wide receivers D.K Metcalf and Tyler Lockett. With Chris Carson's status still up in the air for this game, Metcalf and Lockett will pose a serious problem for the Jets secondary who have allowed six 100+ receiving yard games to wide receivers. I look to what the Chargers duo of Keenan Allen (145 receiving yards, 1 TD) and Mike Williams (72 receiving yards, 1 TD) did to this defense as a blueprint for what Metcalf and Lockett can do. Fire up these two without hesitation for what we hope to be a Seahawks TD feast at home.

I'll admit it: I'm a undercover Titans fan. What isn't there to love? The Music City Miracle, a gritty and underrated mobile QB, the rushing KING and of course the outer world talents of sophomore wide receiver A.J Brown. When you pit them against a AFC South rival in the Jacksonville Jaguars, your love grows as this is the type of showdown we love for fantasy.

The Titans offense revolves around the aforementioned rushing king, Derrick Henry. When the Titans get a lead, Henry is nearly unstoppable. This could be the case against the Jaguars who allow the most yards a game in total offense. It's also worth noting that Henry's two biggest fantasy performances have come against AFC South divisional rivals in Week 6 vs Texans and Week 12 vs Colts. Henry leads the league in rushing yards (1317 rushing yards) and in Redzone touches (55 Redzone touches) and will look to continue his AFC South domination tour in Jacksonville this week along with teammate A.J Brown.

The Titans quietly have two top 25 fantasy WRs on their roster, and, for fantasy football purposes, you could make an argument to start Corey Davis over Brown in this matchup. What I'm in the business of for the TD Dance column is banking on players that will score TDs. And Brown's Redzone targets double Davis', and, Brown's TD total reflects exactly that: 8 TDs to Davis' 4. It's a good problem to have for the Titans, but we don't need to over think this. Lock in A.J to do the dancing duties in Duval this weekend.

"And here's to you, Mr. Robinson
Fantasy footballers love you more than you will know
Whoa, whoa, whoa"

I would butcher the above lines by Simon & Garfunkel if I ever dared to belt them out. I don't need to though, as I'm not a singer, and this is an DFS article and not a karaoke bar in Duval County. James Robinson has been a blessing for all of those that drafted him late or added him early on waivers. Since Week 1, all Robinson has done is produce and currently sits 5th in total TDs (9), 11th in Redzone touches (2.9 per game) and is used on every down which is reflected by his 310 receiving yards. Robinson is a weapon from every area of the field, and will be the focal point of the Jaguars attack against a Tennessee run defense that has allowed the 8th most fantasy production. The Titans were torn up by Robinson in Week 2 for 120 yards and a TD. This was also when Robinson was only seeing a 52.8% snap share, so unless Mike Vrabel and Co. have figured out a way to stop Robinson, we should be in for a big day from the rookie back.

So here's to you Mr. Robinson, and let's see what kind of dancing you can do against the Titans and an 80%+ snap share.

The Vikings and Kirk Cousins have delivered almost three weeks of TD Dance gold. Last week, our picks went 3/3 with Adam Thielen, Justin Jefferson and James Robinson all getting jiggy with it a US Bank Stadium.

I like Adam Thielen to keep the good tunes and end zone moves flowing with a plus cornerback matchup against Carlton Davis. Though certainly not the same player, Davis was torched by Tyreek Hill in Week 12 for the third best fantasy performance of all time. Thielen with this advantageous matchup should be a force to reckon with, and as we saw from the Chiefs, the way to beat the Bucs is through the air. The Vikings will need to dish the ball to both rookie phenom Justin Jefferson and Thielen if they hope to compete with the Bucs. I lean Thielen with his 47.1% Redzone target share and his 12 TDs on the year to get the job done against the Bucs.

I feel nostalgic almost every time I talk about the Bucs, and it's tough not to love what a bunch of old geezer football players can do after a bye week. The extra week of rest, prune juice, and being at home in Tampa has me high on tight end Rob Gronkowski. And really, age is just a number for Tom Brady and his crew. Gronk has average 5.2 targets per game, and with Chris Godwin's status uncertain for this one because of a pin removal in his hand, Gronk might see his target share increase for Week 14. Even at his current target share, Gronk is sixth in Redzone targets and is fourth in tight end TD scoring.

Though not over 30, it feels as if Mike Evans has been in the league forever. Love him or hate him, Evans produces. Evans has scored 11 TDs on the year and ranks 2nd in the league in Redzone targets (18). He's coming off a nine-target, two TD game against the Chiefs and will see Cameron Dantzler who has had problems containing big body receivers such as D.J Moore, Julio Jones, D.K Metcalf, and Davante Adams. Evans volume concerns have been alleviated since Week 8 and as with Gronk, could see a volume uptick if Godwin is limited or unable to play.