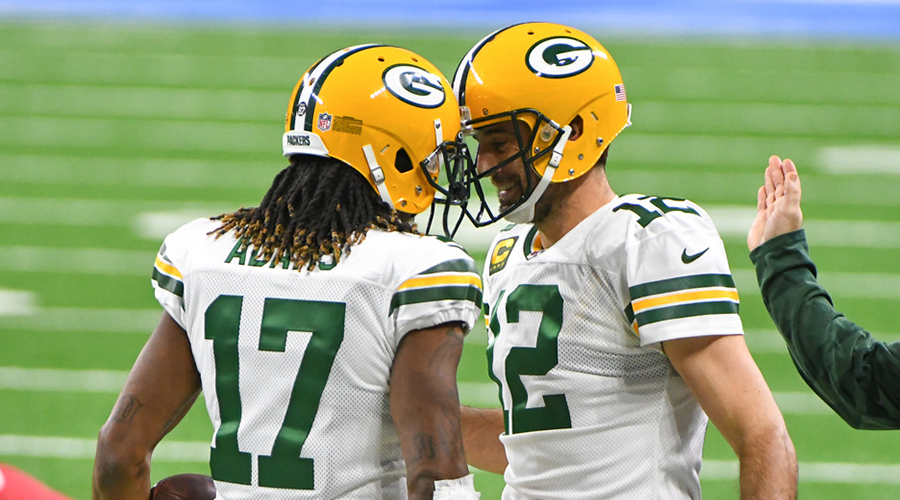 I’m @itsharristime of True North Fantasy Football and I will be here to guide you through my Touchdown Dance selections on a weekly basis throughout this season. I'm convinced that MKF's TD Dance is the most fun you can have on the internet - give it a try this Saturday as we have two excellent matchups that are bound to get you dancing.

It feels like the holidays, doesn't it? Your doing your best to wrap things up at work, there is holiday music on every radio station and companies feel the need to add peppermint to everything. And the best part? The NFL is playing games on Saturday. Treat yourself to some early holiday cheer by playing these two TD contests this Saturday. The best thing about a kicking off the holidays with MKF?  It doesn't matter if you've been naughty or nice all year, it just matters who can score you some TDs and I'm here to help you figure out who's on the Santa's TD list this weekend.

Josh Allen and the Bills come into this game white hot having won three straight and are hitting their stride on both sides of the ball. Even the Broncos at Mile High should not prove a threat to the Bills, and I would recommend taking the overs on everything Josh Allen.

Gotta respect Josh Allen for motivating his team (and then delivering) after he found out about JuJu dancing on the #BillsMafia logo. 😤

“Let them do all the talking, all the f***ing dancing. We f***ing work." pic.twitter.com/FnJNdghIbZ

His connection with wide receiver Stefon Diggs is undeniable, and Diggs is a prime candidate for positive touchdown regression. Diggs is currently 2nd in the league in target volume, and leads the league with 100 receptions. With only 5 TDs on the year, Diggs will look to build on that total against Broncos corner Michael Ojemudia who has been good but let up a monster game to Pittsburgh's Diontae Johnson in Week 2. Diggs Redzone usage hasn't been horrible either, having seen 11 targets there on the year making him a legitimate threat all over the field.

When you talk about the Buffalo Bills in the Redzone, there is no getting around the fact that Allen is their predominant Redzone weapon. Allen has 22 Redzone rushing carries on the year and 6 rushing TDs.

Though Allen will always be the top option at the goal line, rookie running back Zack Moss has built a strong case why he should be the hammer at the goal line. The first is obvious: protect the health of your superstar QB. The second reason is that Moss continues to be the preferred Redzone running back in Buffalo, averaging 2.3 Redzone touches to Devin Singletary's 1.6 per game. Moss has also seen the same amount of goal line carries as Singletary in three less game. The Broncos have been decimated by teams within the 10 yard line, allowing 8 rushing TDs since Week 10 and a Josh Jacobs TD from the 11 yards out would bring that total to 9. The Bills have their eyes on a deep playoff run, and it would be smart to hand the ball off to the rookie running back and let Allen's legs rest.

On the Denver side of the ball, if the Broncos are to stand a chance, there will be no rest for quarterback Drew Lock. And at the centre of the Broncos passing game is the poor man's version of Courtland Sutton, wide receiver Tim Patrick.

Patrick has been one of the only Bronco's pass catchers who has been consistently healthy, as Jerry Jeudy and Noah Fant have both missed time with various injuries and ailments. Patrick has three 100 yard games on the year, and leads the team in receiving yards (643) and TDs (6). In a game with question marks around Jeudy, Fant and the running game with both Melvin Gordon and Phillip Lindsay questionable, Patrick is the only constant in this Broncos offense.

Fire up the good Irish lad who should see his fair share of work in what will most likely be negative game script for the Broncos. And we all know that Lock has no problem throwing those YOLO balls that could put him on John Elway's naughty list and on your fantasy teams nice list.

This season is one to forget for Christian McCaffrey and the 4-9 Carolina Panthers. CMC has been hobbled with a laundry list of ailments, that started with a high ankle sprain and then subsequent shoulder and thigh injuries. There have been bright spots for the Panthers, such as Robby Anderson's ascension to WR1 levels, D.J Moore's continued elite play, and Mike Davis performing as an RB1 in CMC's absence.

Davis stepped into CMC's big shoes in Week 2 and instantly produced. Since Week 2, Davis has been a weapon in the passing game (4th in running back receiving yards), in the Redzone with 3.7 touches per game, and has a 68.1% snap share meaning he's being used in all situations. Davis is a top ten running back in 2020 and he's up against a Green Bay Packers run defense that has given up the 5th most fantasy points to running backs. It gets even better for Davis in this matchup as the Packers have given up 5 receiving TDs to running backs to go along with 13 allowed on the ground. Versatile backs such as Alvin Kamara, Dalvin Cook have had field days with this run defense, and the Packers have allowed four 100+ yard rushing games. It will be no leap for Davis to continue his top ten ways at Lambeau this week with his ability as a pass catcher and a rusher.

It has been a special season for the Packers and they'll look to extend their 3 game win streak at Lambeau Field this week. Aaron Rodgers continues to be on a mission, and it seems that nothing can stop the connection he has with wide receiver Davante Adams. The domination is even more impressive knowing that Adams missed two games with a hamstring injury. Adams is first amongst wide receivers in: fantasy points (26.1 points per game), team target share (33.3%), Redzone targets (22), yards after catch and yards per route run. Though the Panthers secondary has performed above expectations this week, cornerback Troy Pride is no match for Adams elite talent and Adams will be sure to be leaping at Lambeau in this one.

Davante Adams is too good for this league. 8th straight game with a TD. #GoPackGo pic.twitter.com/YOgxQdUqDf

As with the Panthers secondary, the Panthers run defense has improved in the back half of the season after being exposed by blowup games by Josh Jacobs, Leonard Fournette, Todd Gurley and an incredible 192-yard rushing performance by Ronald Jones III in Week 10. Since this game, the Panthers have clamped down the run not allowing a rushing TD over the last three games. That will all change this week at Lambeau where we are seeing Aaron Jones come off his second highest snap share of the season (70.3%), and Jones will be hungry to show off his elite talent at home. The Packers star running back will be jonesing to get over the 1000 yard rushing mark for the second straight season as Jones currently sits at 823 yards. The Panthers should provide an early holiday gift for Jones and bring him that much closer to eclipsing his 1084 rushing yards from 2019.

Start celebrating the holiday cheer with Jones this Saturday by pouring yourself a tall cup of eggnog and getting your dance on. And you know why? Because you damn well deserve it.

Interested in playing something other than the TD Dance? Our fantasy analyst Scott Cullen has his top MKF picks to play for Saturday's two games.