I’m @itsharristime of True North Fantasy Football and I will be here to guide you through my Touchdown Dance selections on a weekly basis throughout this season. I'm convinced that MKF's TD Dance is the most fun you can have on the internet - give it a try this Friday and Saturday as we have four matchups that are bound to get you dancing.

Did you get anything under the tree this year? Or were you naughty and got a big lump of coal in your stocking? Does Santa even come around with social distancing in place?

No matter whether you celebrate the holidays or not,  treat yourself to some holiday cheer and play Monkey Knife Fight's Touchdown Dance to spice up your uneventful Zoom family dinners.

For the first time in ten years, the NFL schedulers have given us a surprise gift: a football game on Christmas Day.

You'll probably be able to catch the start of this game with some pre-dinner Eggnogg, and then be poking your head over a turkey carcass to catch glimpses of the game throughout Christmas dinner. This game and playing Touchdown Dance will trump Grandma Gertrude's apple pie every time.

Kirk Cousins and the Vikings will be fighting their playoff lives and need this win to have any shot at a wildcard spot. The Saints have already locked up a playoff spot, and are looking to clinch the NFC South, which they can do with a win here and a Bucs' loss. Under the dome in New Orleans, you have to like this game that has a 52-point total for fantasy purposes. It'll be the Vikings that I'm leaning on heavily in this one, and no one more than the TD Dance Machine himself, Dalvin Cook.

Cook continues to produce, scoring TDs at a 4.8% rate, and doesn't show any signs of slowing down. With 15 TDs on the year, and his snap share continuing to stay north of 70%, Cook will be critical for the Vikings to beat a tough Saints defense that is top ten against the run and the pass. Elite running backs such as Aaron Jones (69 rushing yards, 1 TD) and Miles Sanders (115 rushing yards, 2 TDs) have made the Saints pay, and Cook certainly fits in this tier, and might just be a cut above because of his heavy usage.

With Cook's new contract, he is a clear building block for the future of the Vikings. And that future looks even brighter now with Justin Jefferson ascending to wide receiver one levels in his rookie season. Jefferson leads the league in yards per target (11.7), averages 16.6 yards per reception, and ranks seventh in air yards per game and is commanding seven targets a game. It became clear early this season that Jefferson wasn't just a product of playing the slot at LSU, as he's been a threat from all over the field and has only played 138 snaps from the slot. Jefferson has the best shot to have a blow up type game against the Saints, as this secondary have allowed 100+ yard games to Allen Lazard (146 receiving yards, 1 TD), Mike Williams (109 receiving yards, 2 TDs), and Calvin Ridley had 90 and 108-yard games against the Saints.

Check out the route-running from Justin Jefferson here. #Skol pic.twitter.com/Kjwh39vYGm

As it has been for most of the season, it will be on Alvin Kamara to help the Saints secure their NFC South Division title. Kamara quickly rebounded to fantasy relevance with the return of Drew Brees seeing ten targets and a receiving TD last week. With Brees back under center and wide receiver Michael Thomas on IR, Kamara will continue to see the receiving volume that made him an RB1 through the first ten weeks of the season. Kamara helped TD Dancers go 3/3 on our New Orleans vs Kansas City picks last week, and should be set to dance again against a Minnesota run defense that just gave up a monster game to Chicago running back David Montgomery (146 rushing yards, 2 TDs). AK is BACK just in time for your fantasy football finals. Hallelujah.

It'll be important that the Bucs don't have much of a turkey hangover as they travel to Detroit for the kickoff of the NFL's boxing day slate. The Bucs need a win to keep their NFC South title dream alive, and a matchup against the listless Lions might be the type of matchup that helps the Bucs continue to right their ship for the playoffs.

It seemed like the Tampa found an extra gear against the Atlanta after quickly falling behind in the first half of Sunday's game. Tom Brady uncorked some lightning and marched his team to a 31-27 come from behind win. It must have given Falcons faithful horrible flashbacks of Super Bowl XXXIII. Leonard Fournette was the hammer/heartbreaker at the goal line for the Bucs, putting home two TDs while rushing for 49 yards. With Ronald Jones dealing with a broken pinky, Fournette could continue to see the majority of the snaps against a Lions run defense that has given up the most fantasy points to the running back position. If there was ever to be an "Uncle Lenny" game, it is this one.

Predicting which of the elite Bucs wide receiver trio of Mike Evans, Chris Godwin and Antonio Brown will have a "game" is incredibly frustrating. Antonio Brown is the prime example: week after week he has been receiving the lion's share of targets, and only climbed into the WR1 conversation last week with a 46 yard TD pass in 4th quarter that put this game away for the Bucs. That's why I'm going back to good ol' Evans in this one. Evans has been the closest thing we can call to consistent in this Tampa pass catching corps, averaging 6.6 targets a game and commanding the second most Redzone targets in the league with 18. Evans did everything but score against the Falcons as he was targeted seven times for six receptions and 110 receiving yards. Against a Lions secondary has given up six 100+ yard games and 14 TDs to wide receivers, Evans will look to build on his 11 TD total.

Lion's rookie running back D'Andre Swift will also be looking to build on his 9 TD total as he chases the rookie lead held by Chase Claypool with ten. Swift is in a good position to do so coming off a 2 TD performance against the Titans and logging his highest amount of Redzone carries on the year with 5. The Tampa Bay run defense is good allowing the fewest rushing yards a game. Where I like Swift is actually as a receiver, where he has 316 receiving yards and has scored twice as a receiver. With Lions quarterback Matt Stafford questionable to play, Swift's versatility could see him have an uptick in passing volume. This could help Swift build his TD total against a Bucs team that has allowed 3 receiving TDs to running backs this season.

This might be one of the strangest home-at-home series we've ever seen in professional sports. That's because the 49ers have also called the Cardinal's State Farm Stadium home for Weeks 13-14. Regardless of where the 49ers are calling home, it looks like Santa will find them for this one with the gift of a TE1 in George Kittle. Kittle looks to be on track to return from a foot fracture, and if on the field, Kittle is a must start. In a season that is devoid of elite tight end play outside of Travis Kelce and Darren Waller, Kittle is TE20 having only played 6 games. Kittle will be a welcome gift for Kyle Shanahan who has done wonders with an injury ravaged squad this season.

The play of rookie Brandon Aiyuk has made the injuries a bit more tolerable for the 49ers, as Aiyuk has slid in seamlessly to Shanahan's system. No quarterback? No problem for Aiyuk who has averaged 11.66 targets and 94.66 receiving yards a game since Week 7. During this span, Aiyuk has scored 4 TDs, and is a prime candidate for some TD dancing against the Cardinals who have allowed 16 TDs to wide receivers this season.

Simply unfair how good DeAndre Hopkins is at football. 😤

In their first matchup, Cardinals superstar wide receiver DeAndre Hopkins did everything but score against the 49ers with 151 receiving yards under the watch of cornerback Emmanuel Moseley. Hopkins will draw coverage in this one from Ahkello Witherspoon who hasn't exactly been tested against elite coverage. Regardless of who is covering Hopkins, his target volume alone (9.9 targets/game) is enough to make him a TD favorite every week. Fire up D-Hop in what should be an interesting one for the NFL record keepers. 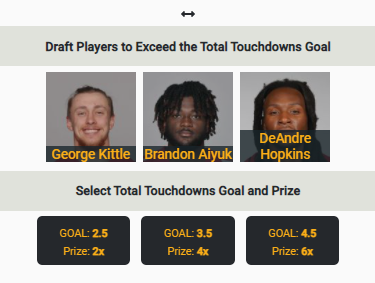 Nothing says the holidays quite like a team from Miami playing in the desert, on Boxing Day, right?

I actually like this game as it features one of the better plays matchup wise for Dolphins running back Salvon Ahmed. Ahmed has been a feel good story being an undrafted free agent that had initially been picked up by the 49ers before finding a home in Miami. The story of Ahmed has been straight forward: give him opportunity and he produces. Last week was no exception as Myles Gaskin was sidelined having been designated to the COVID-19 list and Ahmed rushed for 127 yards and a TD against New England. Monitor this closely as Gaskin could be eligible to return for this game. If he is, I'd pivot to mega pumped up slot receiver/tight end Mike Gesicki.*

Gesicki seemed to really be clicking with rookie quarter Tua Taglviola before sustaining a shoulder injury in Week 14 against the Chiefs after posting a monster 65 yard and 2 TD game.

Darren Waller doesn't need to "click" with his quarterback as we saw last week. Waller didn't skip a beat when Marcus Mariota came in for Derek Carr early in their matchup against the Chargers. Waller continued his dominant play, receiving 12 targets that he turned into 150 yards and a TD. Miami's defense is good, and, typically plays strong against the TE position. The likes of Reggie Gillam and Reggie Izzo don't exactly strike fear into the hearts of defenders quite like a Waller or Travis Kelce who took the Dolphins to town and 136 receiving yards and a TD. Waller will continue his elite play and be a problem for the Dolphins all game long.

If it isn't Waller in the Redzone for the Raiders, it is sophomore running back Josh Jacobs. Jacobs nearly looked like his old self against the Chargers registering 26 carries and a healthy 67.6% snap share. This resulted in Jacob's 5th 100+ rushing yard game and a TD on the ground. Jacobs with another week of rest under his belt will be leaned on heavily in this matchup and will need to produce if the Raiders are to hold onto any playoff hopes.

Interested in playing something other than the TD Dance? Our fantasy analyst Scott Cullen has his top MKF picks to play for the games on Friday and Saturday.