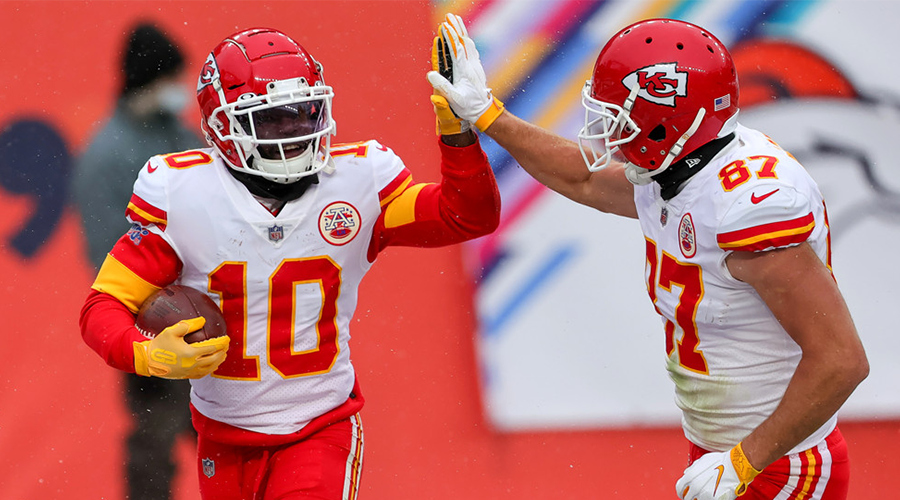 Week 16 of the NFL season has teams jockeying for playoff position as well as teams playing out the string. For all of them, there are matchups available to play and win on Monkey Knife Fight.

There are some quality matchups this week. Colts-Steelers, Rams-Seahawks, and Titans-Packers are three games that involve teams with winning records. The Cowboys-Eagles game has NFC East playoff implications, too.

Whether the game is close or not, there are always arguments for and against each side in the MKF contests.

Here are some angles to consider for Sunday’s NFL schedule on Monkey Knife Fight.

This is a large number, as one might expect for Mahomes, since he has thrown for more than 330 yards in a game seven times this season. While the Falcons pass defense has improved somewhat since early in the season, they have still surrendered more than 330 passing yards four times (plus another couple over 320 yards) including 390 yards last week against Tom Brady. It should go without saying that Mahomes is also better than the quarterbacks that have already obliterated the Falcons previously.

Did you know that the last time that Kelce had fewer than eight catches in a game was Week 7? During that seven-game streak, he has scored more than 20.5 PPR fantasy points in six of them. Needing more than 20.5 points is preposterous but, right now, so is Kelce.

Recent production trends makes this a more competitive matchup. For the season, Chubb is averaging 93.1 rushing yards per game and Montgomery sits at 69.7 rushing yards per game. However, Chubb has been held under 90 rushing yards in three straight games and Montgomery has rushed for more than 100 yards three times in the past four games. The other factor is that Chubb is facing a Jets team that, as bad as they are, is okay against the run, allowing 4.0 yards per carry, while Montgomery faces a Jaguars team giving up 4.6 yards per carry. Even taking all of that into consideration, Chubb’s full body of work this season is just too strong to ignore.

Early in the season it was all about letting Russ cook and, somewhere along the way, that aerial attack has lost some lustre and Wilson has thrown for less than 275 passing yards in six straight games. The Rams are also killers against the pass. They have allowed just one quarterback to throw for more than 275 yards against them this season: Buffalo’s Josh Allen, in Week 3.

Philadelphia’s new starting quarterback passed for 338 yards in his second start and goes up against a Cowboys defense that has been inconsistent against the pass but allowed 319 passing yards to San Francisco’s second and third-string quarterbacks last week.

While the Cowboys run defense has been porous, Sanders has not been as productive lately, held to 66 yards or less in four of the past five games.

Both star receivers have seen their production fall off in the past few weeks but Allen is still dealing with a hamstring issue that could make his status more questionable for Week 16.