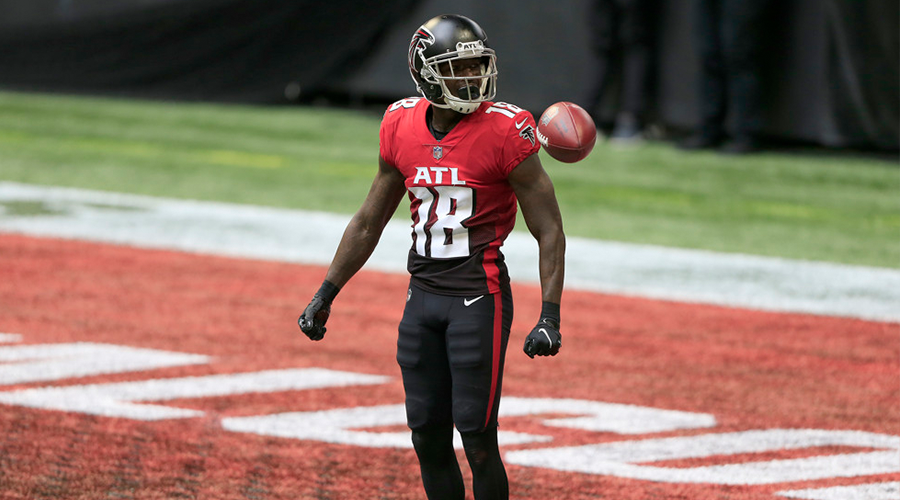 Dance Monkey Dance!: The $5,000 TD Dance giveaway is BACK for Week 16. Rules are easy: enter any early slate TD Dance game and have all THREE players score a touchdown for a chance to win a piece of a $5,000 prize pot. This is on top of all the loot you'll put in your pocket from your regular TD Dance goodness (you must play a minimum of one $5 contest)!

Need help getting started? Here's a Star Shootout lineup for the early games that will give you a good shot at your share of the $5K:

It has been a tough year for all of us. It's got to be even tougher if you are a fan of the 4-10 Atlanta Falcons. Against the Bucs last week it looked like Matt Ryan and Co. were going to deliver an early holiday present for their fans. Instead, the Falcons allowed Tom Brady and his band of merry men to score three unanswered TDs to climb back from a 17-0 deficit at halftime. Not exactly the kind of gift I'm sure Falcons fans were hoping for.

One gift that the Atlanta faithful are happy to have is wide receiver Calvin Ridley. Ridley continues to produce at elite levels seeing top coverage with fellow wide receiver Julio Jones out. It is Ridley's red zone usage that makes me lean his way over big bodied tight end Hayden Hurst, who has come on as of late. Ridley is currently second in red zone targets with 19, and his target volume per game hit a season high last week with 14. In what most likely will be negative game script in Kansas City, this level of volume should be baked in for Ridley with Jones out again.

Volume, talent, and absolute domination has been Kansas City tight end Travis Kelce's calling card all season. Kelce will be a centerpiece of many fantasy football teams this championship weekend, and he's quietly closing in on nearly 1500 receiving yards, going into this prime matchup with 1,318 receiving yards. The Falcons have issues protecting against the pass, allowing the 5th most fantasy points to tight ends, and the 2nd most to wide receivers. For a defense that allowed Robert Tonyan a 3 TD dance day, they are in trouble against the "Zeus" of the tight end position.

This pass from Mahomes to Kelce for the TD was wild. #ChiefsKingdom pic.twitter.com/Z0LOKIjlQg

The Kansas City Chiefs are blessed with many things, and speed is certainly one of them. Tyreek Hill has put up his own Greek god like performances this season, and if healthy, will take advantage of a Falcons secondary that has allowed ten 100+ yard receiving games. In fantasy football land, there are many that claim that all Mecole Hardman needs is opportunity to show he can be a dominant wide receiver in the league. Hardman's talent is undoubtedly there. It was his selection by the Chiefs that was curious as he profiles so closely to Hill, and for fantasy football purposes, he acts as a "handcuff" that we typically only see at the running back position. Well, the time for any "handcuff" to shine is when the player they are handcuffing is out, right? In each of the three games Hardman has received over five targets (versus Patriots: six targets, versus Jets: nine targets, versus Saints: 9 targets) he has scored a TD. Unlock Hardman, and let's get this TD Dance party rolling for fantasy football championship weekend. 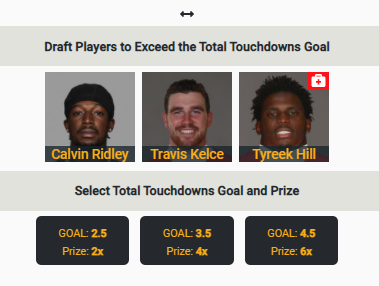 The world saw what was possible on Christmas Day when there was something on the line: the Saints needed a win to help them secure their NFC South title, and the Vikings needed a win just to keep their playoff hopes alive. The result was a 52-33 Saints win and a historic TD Dance performance by Alvin Kamara, tying the running back touchdown record with six.

That's why we are leaning in on this game as it decides who will be the NFC West divisional champions. The Rams defense has been stifling to say the least only allowing 286.1 TOTAL yards this season. It will be running back Chris Carson that I call on to get the dance party rolling and if the Seahawks have a chance to win this game and the division. This is the first week that Carson will be a go without any type of injury designation, and we saw his snap share hit 73.6% last week, his highest on the season. The Rams have allowed a total of two, yes, two TDs outside of the red zone. This game will be nasty, and Carson has no problem getting his nose dirty in the red zone, where Carson has a 31.8% TD conversion rate this season.

And where we lean on Carson to grind out a TD or two in the Redzone for the Seahawks, we are going with a pair of Rams wide receivers in Cooper Kupp and Robert Woods to get the job done through the air for the Rams. Kupp and Woods stat lines this season are nearly identical, separated in targets and receptions by only two, and almost having the same receiving totals (Woods-852 receiving yards, Kupp-908 receiving yards) makes them a potent duo against a Seahawks secondary that has given up the most fantasy points to wide receivers. What separates Kupp and Woods, is Woods rushing ability and Sean McVeigh's ability to scheme up plays for him. This added dynamic for Woods gives him the edge in TD production having eight on the year to Kupp's three, two of which have been on the ground. In a matchup that the Rams need a win, I expect these two wide receivers to do a tango or two against the Seahawks. 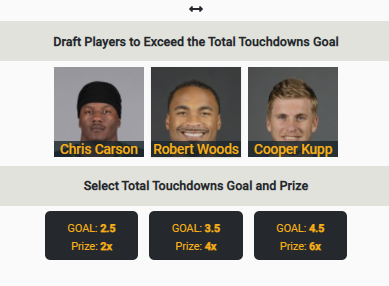 The Titans and Packers are home to my favorite TD Dancers in Aaron Jones, Davante Adams, Robert Tonyan, Derrick Henry and A.J Brown. These players have been consistent money makers all season. Narrowing it down to just three will be tough, and both the Titans and Packers have something to play for in Week 16 which will make it even tougher to narrow it down.

Going with the incredible Packer duo of Aaron Jones and Davante Adams isn't that tough of a choice though, particularly when Green Bay needs this win to secure a first round bye. In what looks to be the makings of a deep playoff run, I expect the Packers to try and get up early with their superstars and pound the game home on the ground in what looks to be a snow filled day at Lambeau. Who better to give you that lead than WR1 Davante Adams?

Adams leads the league in red zone targets (22), is second in TDs (14), and is averaging 98.8 receiving yards a game and has done this all in only 12 games. Going up against a Titans defense that has allowed the third-most fantasy points to opposing wide receivers, Adams will be pulling out all the stops to ensure that the Packers get the win and their hard earned first-round bye. There is no doubt that running back Aaron Jones will be doing the same, and it is encouraging he's coming off his highest snap share of the season seeing 94.6% of the snaps last week against Carolina.

Jones is only 34 yards shy of 1000 on the season, and you know that the Packers will be allowing Jones to go to work with his 5.4 yards per carry against a Titans run defense that have given up on average 114.5 rushing yards a game. It'll be a battle of two of the top backs in this matchup, as we can expect Titans running back and reigning rushing champ Derrick Henry to go toe-to-toe with the talented Jones.

Give us all the angles of the Derrick Henry stiff arm. 😳 #Titans pic.twitter.com/Yd864wQBFj

Henry continues to impress week in and week out, already eclipsing his 2019 rushing total with 1679 rushing yards on the year. The King has more 100+ rushing yard games than he does not, and if the Titans hope to win against the Packers, Henry will be the focal point. Helping Henry's cause will be the Packers defense that has allowed 18 TDs to opposing running backs. When the Titans are in the Redzone, you know it will be Henry who is getting the action. Henry sees almost all of the Redzone carries for the Titans (73.80% of Redzone opportunities), and ranks 2nd in the league with 4.2 Redzone touches a game. When the King reigns supreme in Green Bay this weekend, it gives the Titans shot at the AFC South, and it will be royal for all of us TD Dance fanatics and probably will play big role in crowing you champion of your fantasy league(s).

Wishing you all the best of luck in championship weekend and for all of you to have a safe and happy holidays. 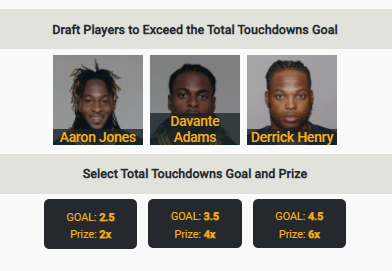